A few months ago, my husband and I looked ahead to the last for-sure three day weekend of our Tashkent tour. We wanted to take advantage of the time for a trip that wouldn’t require taking a day off. As the President’s Day weekend fell between Valentine’s Day and my husband’s birthday, I suggested visiting either Dubai in the United Arab Emirates or Almaty, Kazakhstan for a romantic getaway. Since we already have Kazakh visas, Almaty is closer and the flights are cheaper, and the main reason to go to Dubai is shopping – which holds less and less allure as we near our packout in May – we chose Almaty.

As I’d returned from my R&R less than two days prior in precarious health, my husband strongly suggested we cancel the Almaty trip. Not wanting to lose my money or miss a chance to see Almaty, I was adamant that we still go. At my insistence that I was OK and that we would rest on the trip, he relented. And so with a virtual pharmacy along in my purse, we went. And we loved it.

Almaty at first glance is another major Central Asian city. But a closer look shows many differences from Tashkent, not the least of which is the presence of foreign investment and tons of Western companies. Surrounded by a chain of imposing snow-capped mountains, we could tell as our Air Astana flight made its way northeast that we had left Uzbekistan. The flight took barely over an hour, and we had a row of three seats to ourselves. Thank you Air Astana check-in rep in Tashkent!

One of my first cultural observations was the calm and orderly way the deplaning and tarmac shuttle worked. The Almaty airport shuttles were large, comfortable, and with lots of seating. There was plenty of space for everyone; in Tashkent full flights are packed onto two shuttles, forcing people to press against strangers like cattle and leaving one little human dignity.

When the shuttle reached the arrival hall, passengers walked – not ran – indoors in an orderly manner to what ended up being a very well-organized immigration checkpoint. The lines were cordoned off, making what ends up a scrum in Tashkent with no actual lines and people literally pushing and shoving to get ahead in the crowd not possible.

The bathroom was clean, the baggage carousel was rapid, and the Customs process was waived for us as diplomats. Our hotel driver was standing in the designated area and he guided us capably through the afternoon rush hour to the Ritz Carlton.

Last fall when I made our booking, I chose the Ritz over the more centrally located downtown Intercontinental simply because I wanted us to be closer to the mountains. That’s also why I requested a corner room with a mountain view!  On Friday evening we unpacked, had dinner, and then retreated to our suite.

All day on Saturday after breakfast I rested and coped with my medication regimen for my multiple herniated discs and pinched sciatic nerve. The room was so beautiful, so comfortable, that I just let myself enjoy sinking into the huge bed and dozing off watching English language television. Outside the snow fell for hours and hours, enormous and fluffy flakes that piled fast and were cleared diligently by multiple crews below. We talked about going outside, but in the end the weather made me want to stay in, write my very long R&R blog post, snooze, and keep my promise to take it easy. 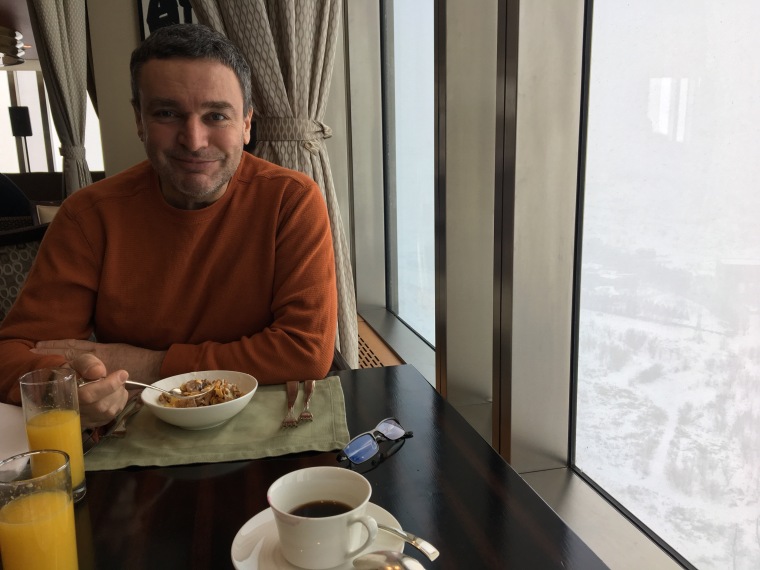 Not even the Starbucks downstairs could draw me out, but that was only because I didn’t have to go – my husband went there in my stead. He also went to the hotel gym to work out and even toured the large Esentai shopping mall next door, bringing us back Korean food for dinner, but all I was capable of doing was laying low.

“Last year for my birthday you took me to the Maldives, this year to the North Pole!” my husband joked. I reminded him that we would have spring in Tashkent, followed by summer in the U.S., and that upon our arrival in Australia later this year spring and summer would start anew. “We can have some winter before a year of spring and summer,” I smiled, aware that my love for winter was not shared.

On Sunday we braved a second day of heavy snow and walked around the Esentai next door to the Ritz. As the store selection was more Gucci, Saks, Jimmy Choo, and Valentino than it was Nordstrom, Sephora, Macy’s, and Bebe, we didn’t buy anything. However, we absolutely marveled at the gourmet grocery store in the basement. I have to say that it rivals any upscale grocery store in the U.S. and bests many of them. I was floored by the displays, the prices, and the overwhelming foreign selection of, well, everything, including a partnership for imported American beef.

Perhaps my harping about shopping makes me look materialistic, but I ask for dear readers’ indulgence, especially if you have not lived in a place where the market is…let’s say, severely restricted. Taking photos in a Tashkent grocery store instantly draws testy security guards, so it’s been a point I’ve struggled to make. Capitalism seems alive and well in Almaty, although I note the mall and store were eerily near empty. 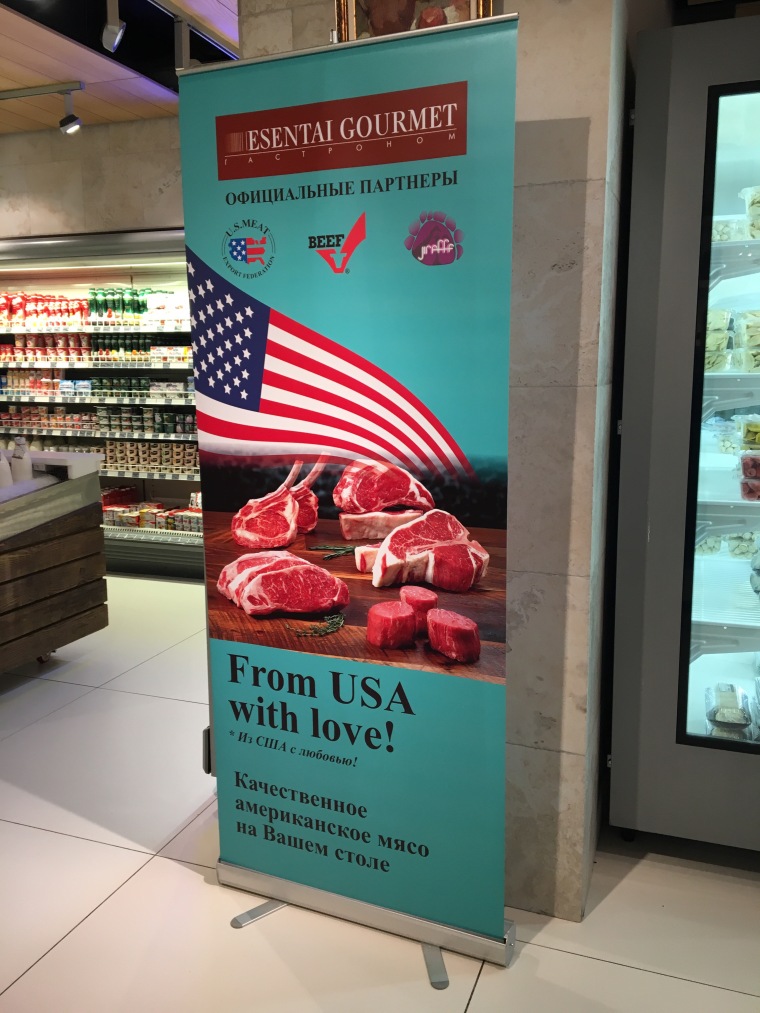 We left there and took a cab downtown to see Zenkov’s Cathedral, otherwise known as Ascension Cathedral (Вознесенский собор). The church, built in the early 1900s, is located in Panfilov Park and is entirely wooden. I was really looking forward to seeing this colorful cathedral in winter. 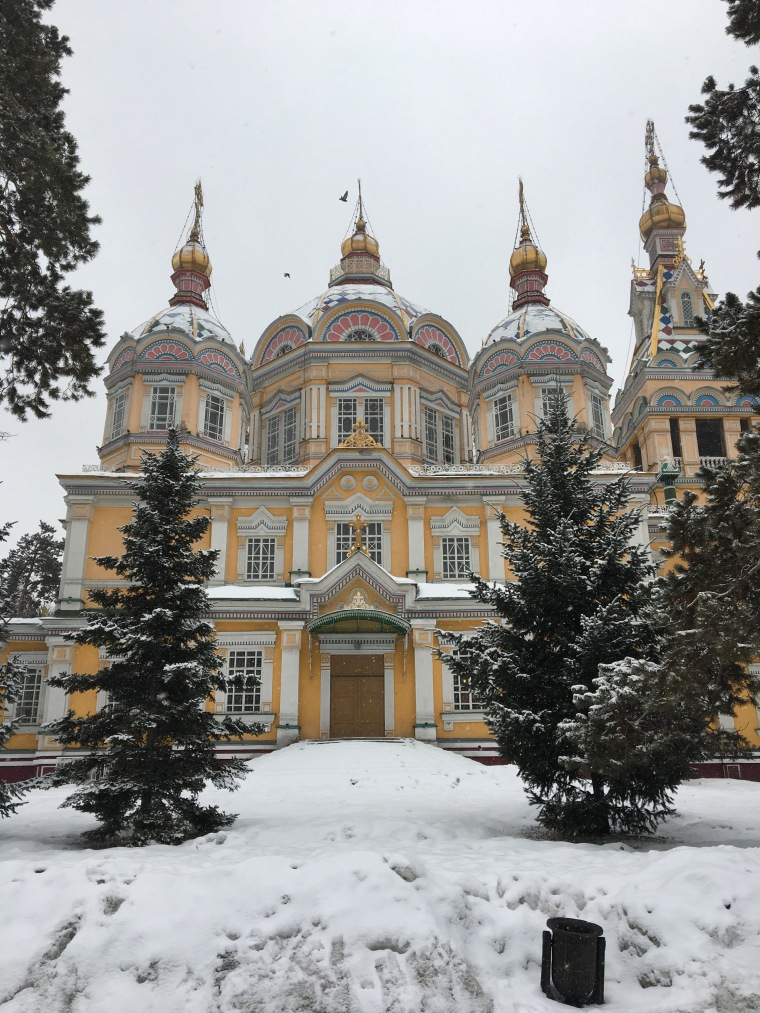 Before going inside, we spared a few tenge for birdseed to feed the pigeons, which quickly got a little out of hand. 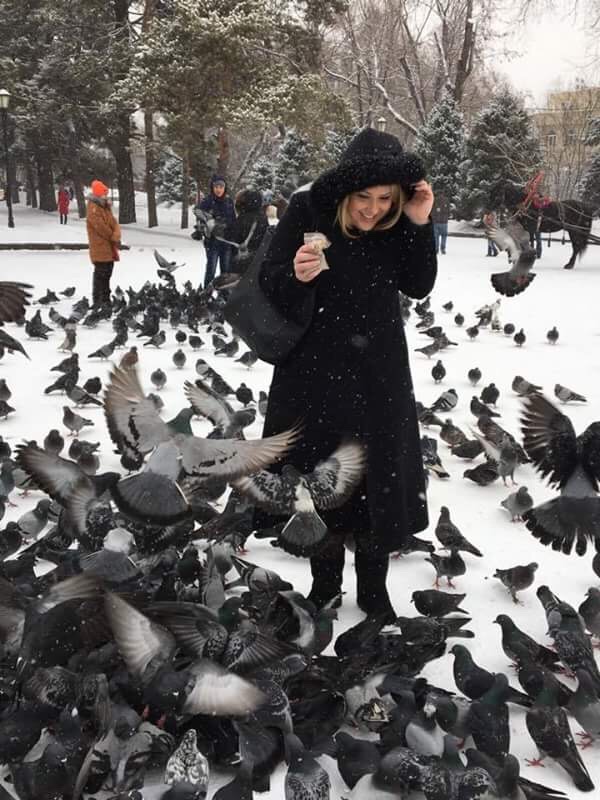 Like in every Orthodox Church we visit, we always light a couple of candles for the souls of my grandparents and my husband’s father. 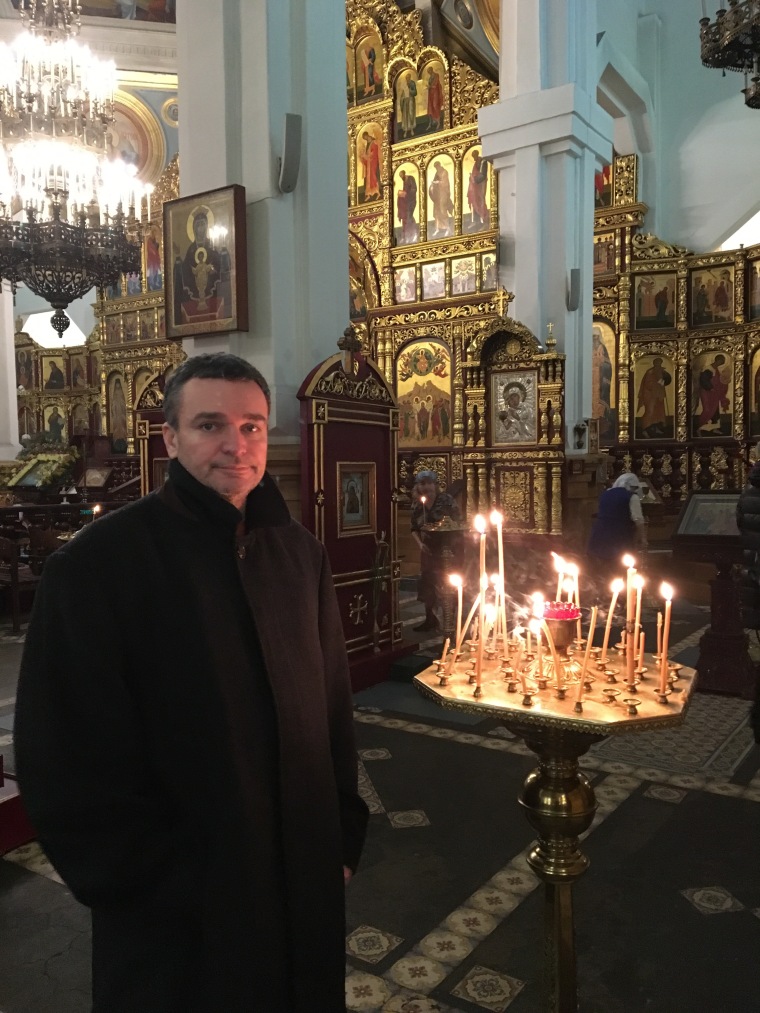 Afterwards we strolled through the gently falling snow towards the Hard Rock Cafe. After fifteen minutes of walking while Google map navigating with a quickly draining phone battery, we caught a bus for five blocks that saved us. It was entirely my husband’s impulsive and good idea, and for that he parted with 80 tenge (26 cents!) to pay for our ride. I am not ashamed to say that, like at the Hard Rock Penang and Hard Rock Budapest before on this tour, I enjoyed every moment of eating Hard Rock Almaty nachos!

Later that afternoon we sat in the hotel hot tub where, after everything I had already been through, I had a dismaying slip and fall at the edge of the pool. Middle of the afternoon and me as sober as a judge. I blame the wet slippers I was wearing and don’t think I would have fallen otherwise, but it was terribly painful and scary. After a 90 minute rest submerged against a water jet, I deemed myself tentatively OK.

Still full from lunch, we skipped dinner and went back to the mall to see an English language movie – my first movie theatre in 11 months, since we were in Kuala Lumpur. Uzbek movie theatres all dub American movies into Russian, so we’ve never bothered going. This was a real treat, compounded by the excellent and helpful customer service at the theatre which blew our minds.

Monday morning dawned clear and beautiful. For the first time, we could fully appreciate the view from our hotel room. 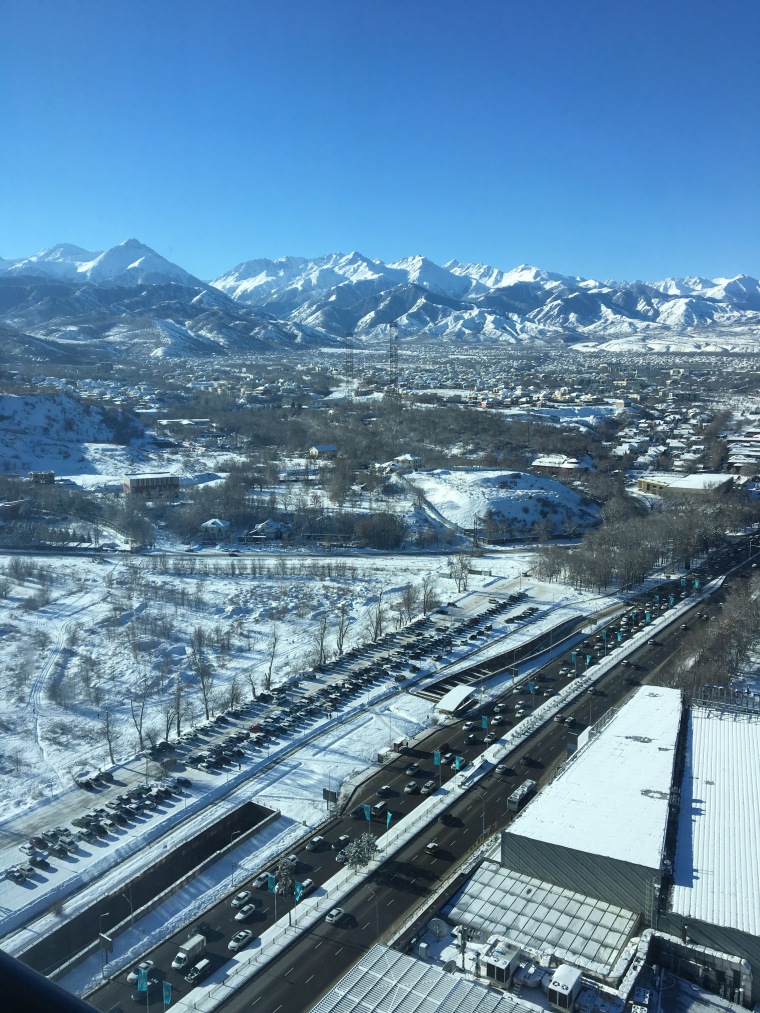 As we sadly departed the Ritz, despite the 18 degree Fahrenheit (almost -8 Celsius) degree weather, we asked ourselves why we hadn’t come to Almaty sooner. I think we just had no clue how great it was here. People are very open and friendly. Things seem to function. There is real choice. We had a great experience, and a great flight back, running into a few of our Tashkent colleagues in the Almaty airport departure and duty free area. We talked about how relaxed and happy we felt in Almaty.

Arriving back in Tashkent on a rare afternoon flight, we had the similarly rare luxury of entering the airport through an attached walkway rather than a tarmac shuttle. There was not even much of a crush at passport control, where there is no dedicated foreign diplomat line and where Uzbeks all use their own line as well as the “foreign citizen” line. And I use the word line very loosely.

I hope that if you have a chance to visit (or live in) Almaty you will take it. We certainly will in the future if possible!

In other news… This postcard from Almaty marks the 100th post on the Collecting Postcards blog! It coincides nicely with another notable “100”: This past week marked 100 days until my PCS (permanent change of station) departure from Tashkent. Insert standard cliché here regarding disbelief about the passage of time.

2 comments for “Postcard from Almaty” 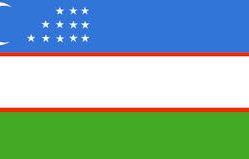