As I mentioned in my previous post, last week we hit a countdown milestone: 100 days remaining at post in Uzbekistan. But there’s another countdown happening at our house too: we’re waiting for our two desert tortoises to emerge from their second winter hibernation under our front lawn.

As friends and longtime blog readers know, two months after I came to Tashkent in spring 2015, I inherited a little Central Asian desert tortoise. He belonged to my social sponsors who were getting ready to depart for their next post in Kyiv. They said their sons had a tortoise and asked me if I could take him to live in my front yard. Tortoises are native here and roam around, but are often run over by cars or captured by curious little boys, so I was delighted to have him. My husband was still a couple months away from arriving in Tashkent, but he was excited too. We hadn’t had a pet since our goldfish died in 2008! (Of course we cared for tons of hummingbirds, cardinals and other birds in a mini-nature preserve my husband created on our balcony in VA, but I digress.)

The tortoise’s name was… Scott. He didn’t really seem like a Scott to me, so I renamed him Arslan. My sponsors told me he likes to eat grass and hides a lot, and that was true. Sometimes in the morning before work I would be afraid he was hiding underneath my car, but I usually found him under the big garbage can on wheels or hiding in the backyard by a water pipe. I found out he also loves lettuce, watermelon, cucumbers, and tomatoes. He doesn’t love bananas, his special tortoise pellets, or the calcium powder I put in his water to keep his shell strong.

Then in August of 2015, after a little research, I realized my Arslan was actually an Arslana! I felt sad watching her roam the yard alone, circling the perimeter of our 35′ courtyard walls over and over and (presumably) looking for a way out, so one day I went to the outdoor pet market and found her a male friend who I named Jamshid.

So Jamshid and Arslana slowly started to get along, and my husband arrived in Tashkent shortly afterwards for his own settling in. We started learning about how tortoises hibernate in the winter. Through some amateur research I discovered that tortoises stop eating about two weeks before hibernating, and stop drinking water a week beforehand. Their digestive systems need to shut down in order for them to hibernate. Our colleagues with native tortoises told us, “They’ll just dig a hole in the lawn one day and disappear until spring!”

I’m no expert, but we didn’t see them doing much in October 2015 other than slowing down and making pathetic attempts to scratch at the dirt. My husband churned up part of our lawn to help them out, but they spent more time sluggishly escaping than digging in. As they hadn’t had food or water in quite a while, we were worried.

I went on vacation by myself to Prague and Sarajevo in November 2015, and when I returned, my husband told me they were finally “buried,” and well and truly sleeping. He’d added some fibers we used to use when we lived in VA for potting balcony flower baskets as “lids” to encourage them to stay in. Throughout the winter when it rained or snowed heavily, we fretted from inside the house. Would we see them alive in spring? Were they drowning in mud?

And then a year ago yesterday, on my husband’s birthday, they came out. Somehow even though their burrows were separate, they came out within about 30 minutes of one another. It was a great day and we were really relieved. It also started the season of them being on the move around the courtyard and me having to check their whereabouts between opening the gates and backing my car in to the covered part of the driveway.

The tortoises enjoyed their summer 2016. It was their second summer with me and we had our routine. They spent it pretty much hiding…

…or learning to share food, more of a challenge for Arslana (right) than Jamshid (left).

And of course, they thought everything in the yard was theirs!

Whenever we were in the yard gardening or hanging out they would follow us around at astoundingly quick speeds. Sometimes if I wasn’t careful, one would sneak up and bite my red polished toenails. It didn’t hurt too much, but made me realize how easily they could be stepped on. Also, according to my mom during her visit to Uzbekistan last August, she witnessed some “tortoise love,” and as I saw photographic evidence of said love, I can vouch for the veracity of her claim!

In the autumn of 2016, we were more prepared for tortoise hibernation and knew better what to expect. My husband made some…shall we say, excellent upgrades to their winter palace.

Jamshid and Arslana have now been completely asleep since October 18, 2016. That’s nearly four and a half months, compared to last year’s three and a half months. Here they were a few days ago: 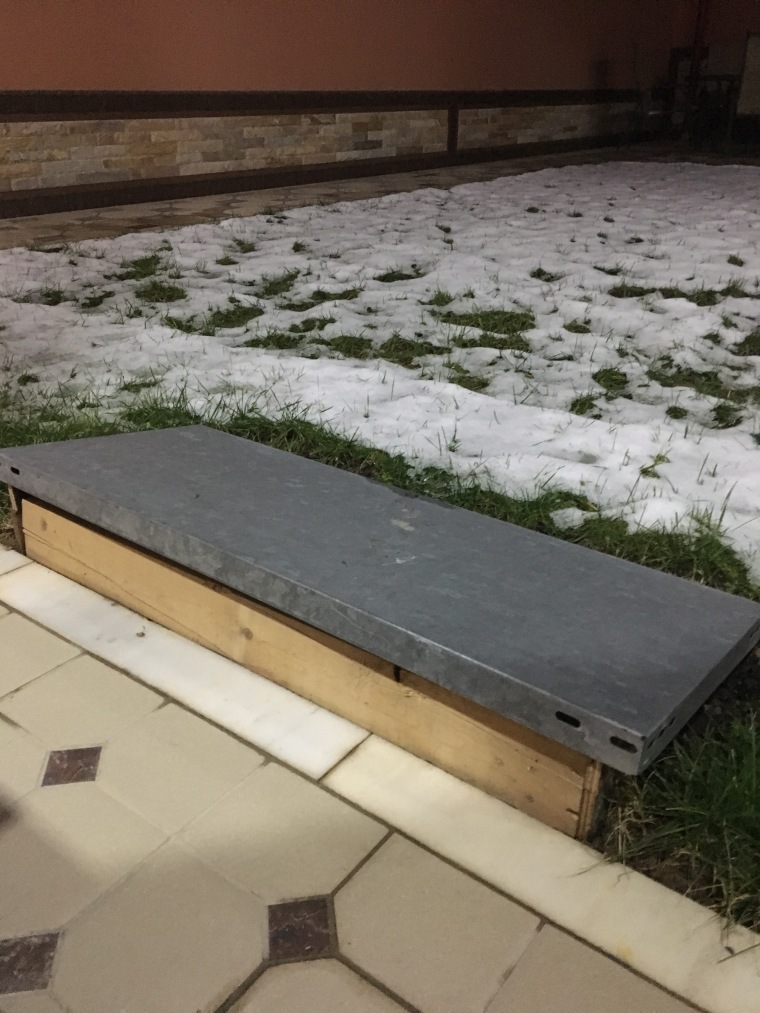 As of the end of February 2017, we’re still waiting for them to emerge. When they do, they will easily push the little wood “door” plank down, as it’s not connected to anything. That will alert us to the fact that one or both are out, in case it happens when we aren’t home (which is most of the time).

Given that snow is in the forecast again for later this week, I hope they correctly time their exit from a cozy warm sleep. It looks like a proper spring won’t start for a couple of more weeks – nearly a month later than last year. We shall see!