Last Saturday we hit the road on our 2,000+ mile journey to my third diplomatic posting at U.S. Consulate General Ciudad Juárez, Mexico. Since Juárez is directly across the border from El Paso, Texas, our move is by car rather than by plane. After I’d received the assignment in late 2018, I’d perused blogs of others who had been posted along the Mexican border and read about how they turned their PCS moves into fun road trips. I collected information and daydreamed about places we could stop, people we could visit, and things we could see and do on the way to Juárez.

If someone would have told me that when we left, the United States would be in the middle of a national health emergency, that a viral pandemic would be sweeping the country and infecting millions, and that we would tear through the south like it was burning down rather than doing those fun things I’d planned, I would have been gobsmacked.

And yet, that is what has happened, and thus a trip we had planned to enjoy over a two-week period is not only occurring three months late due to the pandemic, but has also been condensed down to five or six days.

Two people who have barely left their apartment in four months, or had contact with any other people, are now driving from Virginia to Mexico via North Carolina, South Carolina, Georgia, Alabama, Mississippi, Louisiana, and Texas. The south is particularly affected right now by COVID-19 cases, as shown in the below map from last weekend’s New York Times Weekend Briefing.

And that my friends, is the danger we are driving straight through. With that said, we have still tried to enjoy ourselves as much as possible.

We started Saturday morning by dealing with all the remaining things in the apartment. We packed up the Volkswagen and the Toyota with the items we had held out from the prior day’s packout, showered and cleaned out the fridge, dumped the trash and recycling, left our fobs and parking passes and keys on the counter, took “before” pictures of our odometers, and said goodbye to our home of 11 months that sheltered us so well during the pandemic.

We hit the road for South Carolina to see my stepdaughter, V’s 17-year-old daughter D, who will start college in Georgia next month.

Southbound through the beauty of Virginia 🌲

V and I agreed that on this trip, we would stop at every state line for a photo. At the first crossing between Virginia and North Carolina, it wasn’t a big enough deal to V to even get out of his comfy spot in the truck, but as you can see, I was enthused.

We stayed in Charlotte, NC and spent most of Sunday and part of Monday morning with D, who lives just over the state line in Fort Mill, SC. We took her shopping for bedding, a backpack, a new laptop, and all the dorm stuff like shower caddy, lamps, etc. that new freshman need.

Oh, how American a Super Target in the south feels… 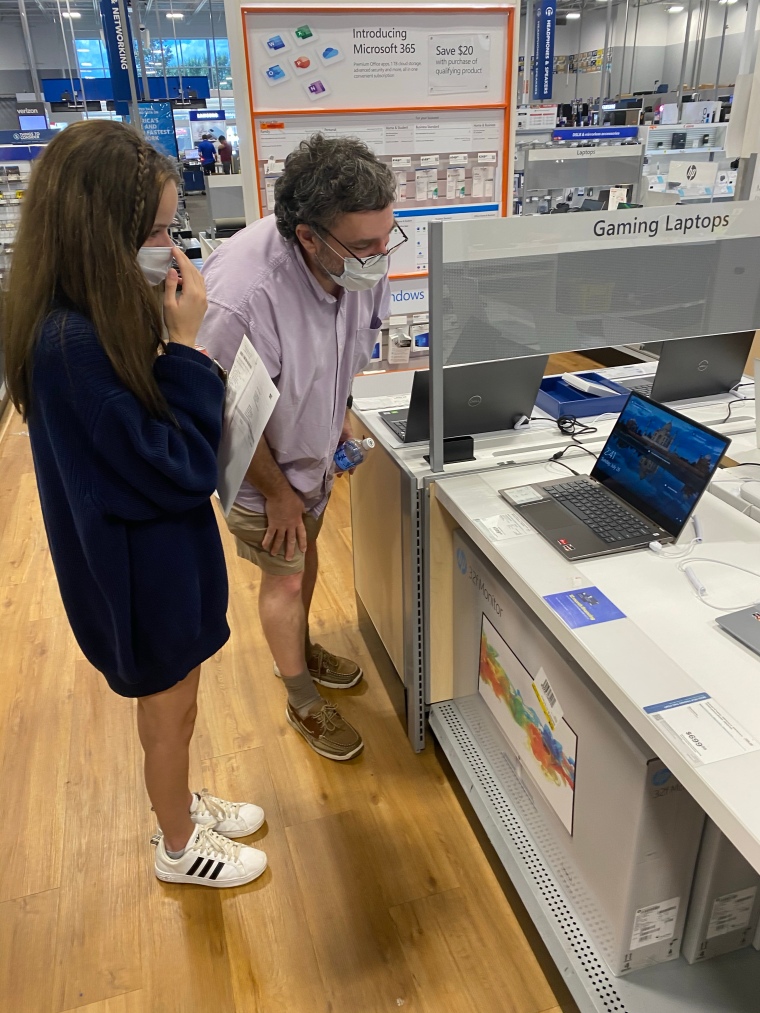 We found the one!

We also made some time to enjoy some good southern chicken wings, grits and cheese (the best this California girl has had yet), and Mexican food.

The first leg of our trip went pretty well – only two things really surprised me. The first was how many people in the Carolinas weren’t wearing masks compared to people in Virginia and DC (or were wearing masks over their mouths but leaving their noses sticking out, defeating the purpose).

As far as I can tell, most businesses are taking the pandemic seriously, with signs everywhere at hotels, stores, and restaurants asking people to wear a mask before entering. But the public in general doesn’t seem to be doing the amount of social distancing, hand washing, or surface sanitizing that we and those around us have been. Are people bored and lulled into complacency? Selfish and unwilling to make sacrifices? Not scared enough? Ill-informed? Ideologically opposed to masks or suspicious that the virus is a hoax? Figuring their friends and family members seem fine so why bother keeping a distance? Plain lazy? I don’t know, but it was a culture shock to be sure.

The second thing was how difficult it was to unload the most valuable items from the cars and cart them all into the hotel, only to repack them all the next day. It was absolutely exhausting! The first time we did it, there were four trips back and forth with a large luggage cart.

Guess we will keep on having to do that for the next… five states!