During the first part of week 15 in Spanish (and the second week of my language immersion in Ecuador), I continued enjoying the great outdoors while generally getting my butt kicked by high altitude, thin air, humidity, inflammation and old injuries, and stairs. I had the last laugh though, because I practiced my Spanish, saw new and cool things, and made it through each challenge without quitting.

[This is the third blog post in a series of four on my Spanish immersion experience in Ecuador. If you missed either the first post or the second post, you can find them at the links.]

For my second full Sunday in Ecuador, four of us arranged a private tour to the rainforest in Mindo. Mindo is a couple of hours northwest of Quito, and unlike the prior day’s day hike on the Cotopaxi volcano, other students from the academy and general travelers didn’t go. It was just me, S, D, and J. (H was returning home sooner than the rest of us due to a compressed schedule, and had opted to spend more time sightseeing around Quito instead.)

It was cool watching the landscape get more and more jungly as we left the city and wound our way up towards Mindo. Our guide’s van had a serious and sudden oil leak, so we spent about 40 minutes in a shop taking care of it, but it wasn’t that big a deal. And given the trail of oil leading across the lot, we wouldn’t have made it much farther without sorting it out! As the former owner of a 1980 Mercury Cougar XR-7, I totally get it.

As much as I loved the rainforest, and spotting a variety of birds including hummingbirds and two toucans (seriously, the highlight), the hike we did in the warm, humid weather was a little too much for me after hiking to 15,953 feet the day before! But good company and the nature made me glad I saw it through, although TBH I was pretty miserable for part of the time.

We started off checking out a “bird garden” developed by a local man that according to his observations, was visited by about 43 different species of birds. I saw a woodpecker with a flaming red head, some little blue birds, dozens of hummingbirds, and quite a few others which I couldn’t identify.

The garden goes through a lot of fruit and sugar!

Then we headed up a hill to take a cable car across the valley. We would hike down to the river and then hike back up the other side. I obviously neglected to ask how strenuous a hike it was… not that it would have mattered. I was in for a penny, in for a pound. 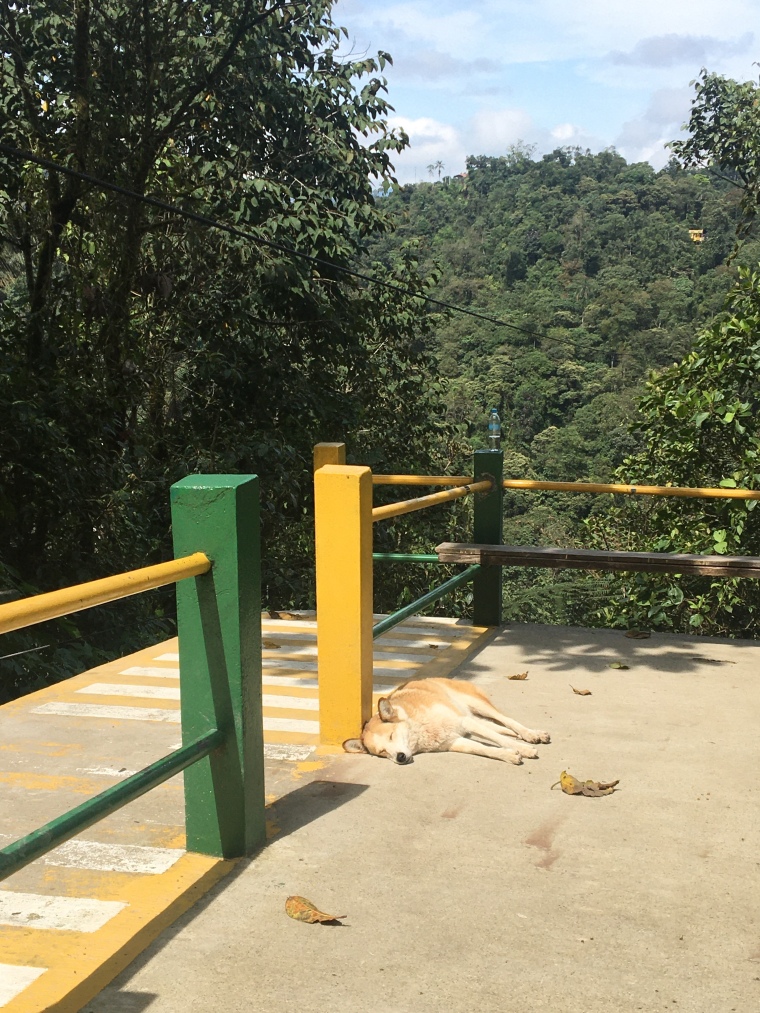 Ecuador is full of dogs with the best jobs ever 🇪🇨

Hiking downhill, I was having some numbness in my left leg. It didn’t really concern me because I know I have some nerve damage from the spinal cord injuries I got in 2016 and 2017. I had to take the hill a little slower than my colleagues, but I just kept going. There were so many cool trees, plants, and flowers that I’d never seen before and bird calls that I kept pausing to try to hear better. 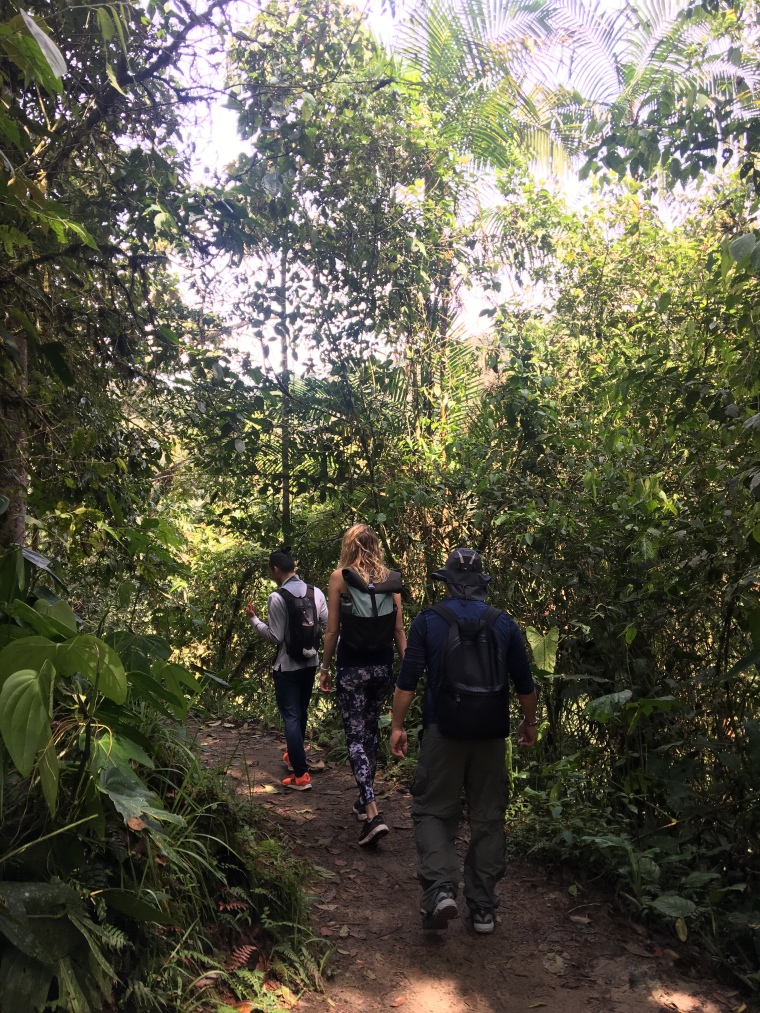 At the bottom, we came across a nice river but instead of putting my feet in, I started almost immediately to climb back up because I was worried about how long it would take me. Taking off my shoes and socks and putting them back on, especially on my left foot, is an arduous process that requires a hard surface to sit down on. And it’s probably as painful to watch as it is for me to do. So I filed it under more things I need to work on doing better and faster. 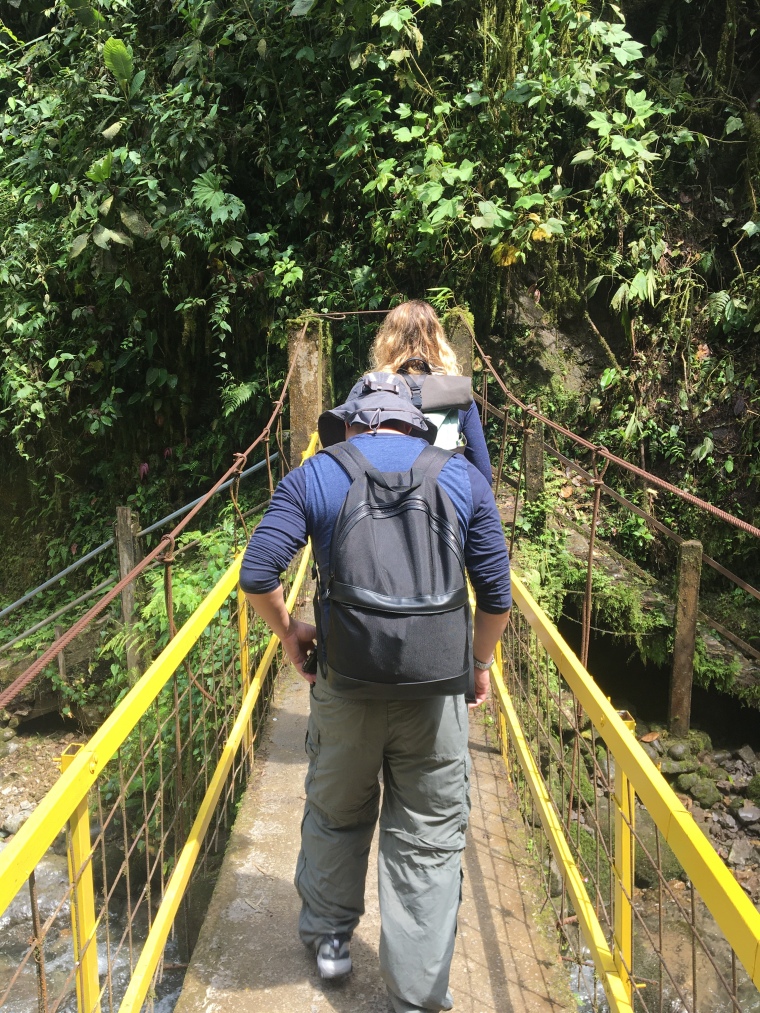 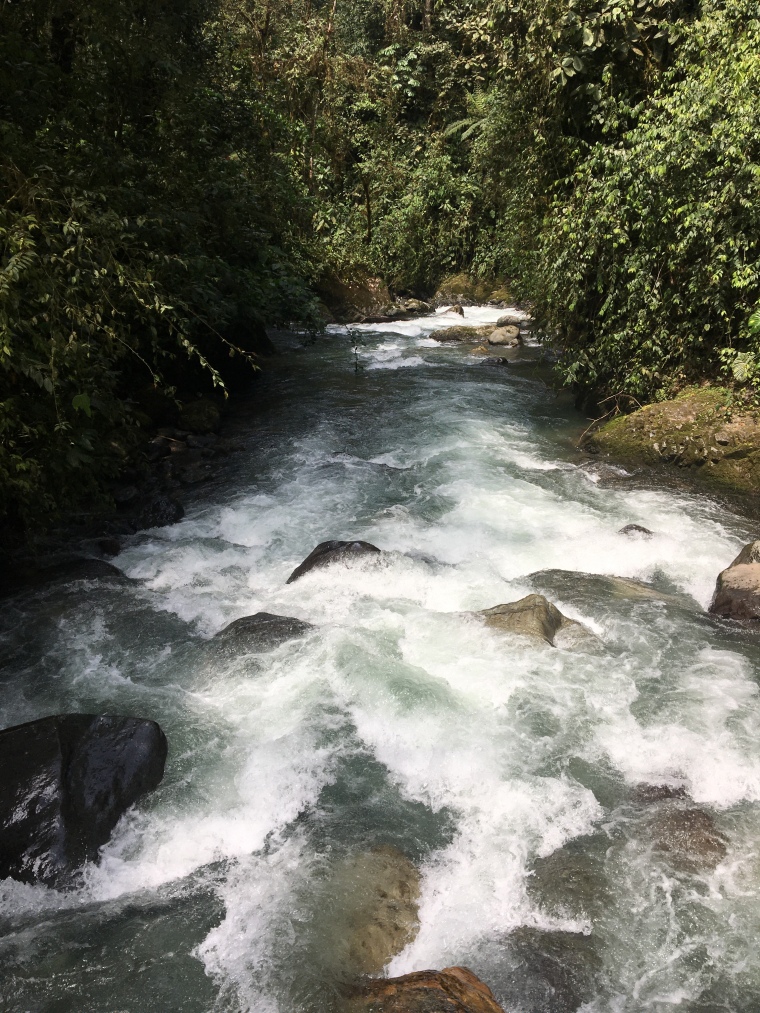 The hike back up seemed endlessly steep, and endless. I had to stop a bunch of times to rest. I also fell once on account of the pins and needles feeling in my left leg, but no one saw it and I wasn’t hurt. I felt cranky, hungry, hot, and annoyed but I just tried to focus on the beauty around me and let it go. The thing that bothered me the most wasn’t being alone, but missing what the guide said. I think my colleagues were just trying to give me some space to make it on my own.

Despite being in bad shape and hampered by old injuries and chronic illness, I am still strong. I am tenacious in all areas of my life and that’s why I keep making it through. My baseline day is probably equivalent to a bad day for many, so it’s a challenge to walk that line between pushing myself and doing too much.

In the end, of course, I was last to reach the top anyway, but not by much! By the time we finished I was completely red and drenched in sweat. Did I mention humidity totally pisses me off, even though I have ten years’ residency in the Commonwealth of Virginia?! Somehow that hike was harder for me than Cotopaxi, which was higher altitude and more than double the ascension, just because of the heat. Thanks to J’s bug spray though, incredibly, I didn’t get a single bite!

Then we headed to some nearby ziplining at Mindo Canopy Adventures, where a lady found it necessary to ask me if I had fallen in the river. Tee hee. The first half of the 10 ride ziplining course was fun and easy, but after each ride on the second half was a steep or relatively long ascent to the next platform.

My left leg was pretty numb and between the altitude, not having had the correct nutrition for strenuous activity that morning, and feeling overall out of shape, I can’t say that ziplining was my most fun activity. I remember it being so much easier in Hawaii this past August!

I just felt out of breath and rushed the whole time, like the pace I needed to do it at was too slow for the group. I’m not sorry we did it, though. I kept moving along the fastest I could and it worked out. The absolutely best part of it was seeing this toucan up in a tree, and one other who we couldn’t manage to photograph. Feeling the wind in your hair as you fly above the tropical trees is an outstanding and exhilarating feeling.

There is a butterfly place in Mindo too, but we skipped it because our guide told us that between December and February, most of the butterflies migrated somewhere else. So instead we enjoyed some delicious lunch and craft beer!

You can see the winged Virgin from different vantage points around Quito. I guess depictions of the Virgin with wings aren’t too common, but this particular statue was based on a 1734 wooden statue by Ecuadorian artist Bernardo de Legardo. So, wings it is.

She stands atop the hill at El Panecillo overlooking the Centro Histórico at 135 feet (41 meters) tall.

The Virgin was constructed between 1971 and 1975 and is the tallest aluminum structure in the world.

Lit up at night… ¡Feliz Navidad!🎄

She is made up of more than 2,000 pieces of aluminum that were assembled, numbered, disassembled, and shipped to Ecuador from Spain.

We got some great photos up there, enjoyed the stained glass windows, and snagged a few trinkets at the markets around the base of the statue.

At the base of the statue there’s a British-style restaurant called Pim’s, where we enjoyed some craft beer, cocktails, and J dug into some octopus!

Riding the teleférico (cable car) up Quito’s Pichincha volcano to the Cruz Loma Lookout was something I had looked forward to since I’d arrived in Quito. There’s something about ascending to the highest tower or other vantage point above a city that I just love.

Between the Basílica del Voto National and El Panecillo, we had found some spectacular vista points of the city, but the view delivered by the teleférico ride was something else altogether. The elevation at the top is around 13,000 feet, or just under 4,000 meters.

The 20 minute ride up was smooth except for when some wind rocked our car back and forth for a nauseating minute – luckily, it didn’t last. And the view was worth the ascent! There was some cool grass that reminded me of the spinifex in the Australian Outback, only greener.

When the fog clears, you can see several volcanos in the distance, including Cayambe, Cotopaxi, and Corazón. But because of the cloud cover, we had to take this sign’s word for it.

Warm enough to take your jacket off, too!

There was a guy up at the top who would let you take as many photos as you wanted with his llamas for one dollar. The llamas didn’t seem to be too keen on this idea, but they went along with it for S and J.

We also found a swing set and had to give it a whirl – who doesn’t love to swing at 13,000 feet? It made me feel kind of light and weird. Looking at Quito so far below, I fought the inexplicable urge to launch myself off. Afterwards, we saw some lightning and decided to beat the storm back down. While my colleagues enjoyed some hot chocolate and empanadas, I went for an Ecuadorian favorite – humita especial con queso – or steamed corn cakes with cheese. And of course… cerveza local. 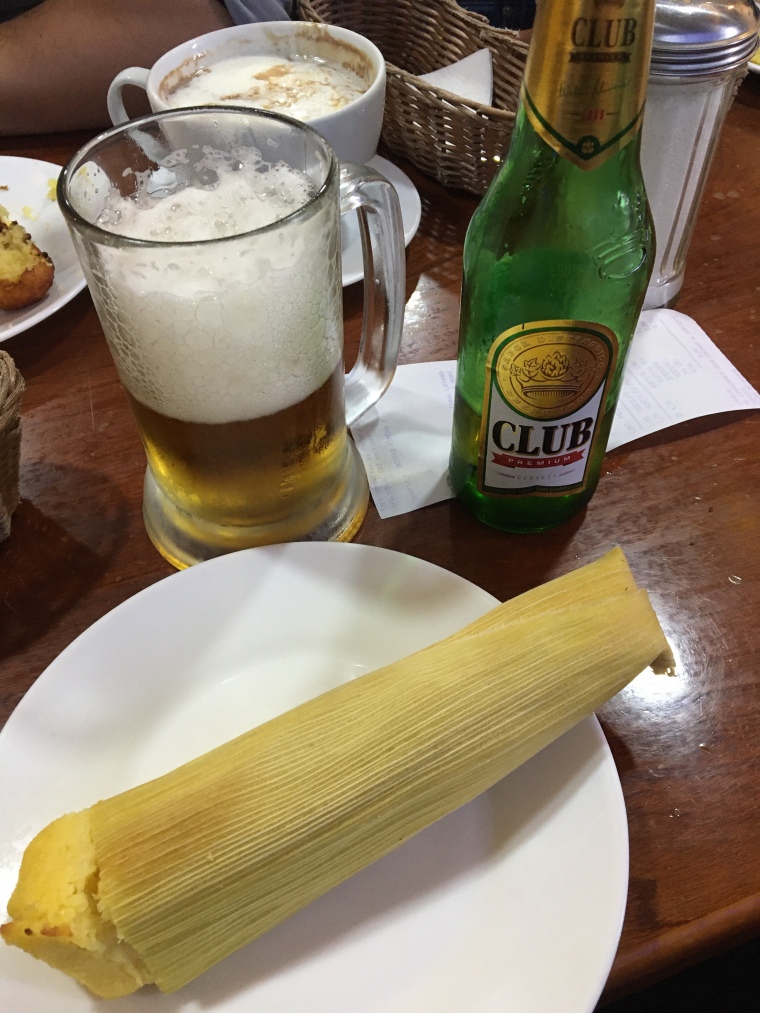 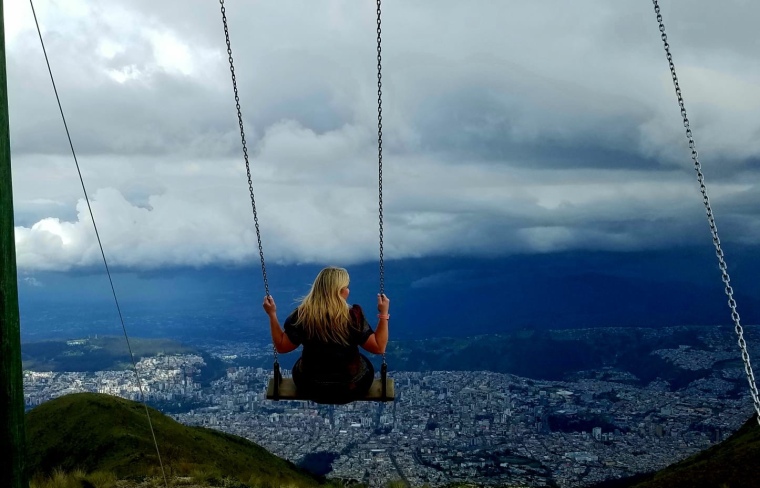 There is now just one blog post to go in my series on the FSI Spanish immersion program in Ecuador! In my final post, I will talk about graduating the program, what I brought back, reflections on the immersion, and a side trip J and I took to the thermal springs at Termas de Papallacta before heading back to DC.