We left Shreveport as early on Thursday morning as we could muster and set out for the Louisiana-Texas state line, less than a half hour away. It was to be our lightest day of driving at only (!) 369 miles. We also had a visit to my dear friend K in Fort Worth to look forward to before breaking for our final night in Abilene.

People had told me that there wasn’t much to see driving across the vastness of Texas, but I beg to differ. Since it was my first time doing so, the oil drilling, the tumbleweeds, the proliferation of Dairy Queens, and the speed limit jumping to 75 mph as soon as we crossed the state line all got my attention. Anything different and interesting to look at on a seven-day driving trip was welcome indeed.

Of the eight states we drove through between Virginia and Mexico, Texas was by far the largest – we would even change from central to mountain time

It is hard to explain just how enormous and open Texas is. Being from the big state of California myself, driving several hundred miles from one end of a state to the other isn’t exactly new for me, but it felt uncommon and impressive all the same.

We stopped off at K’s house for a socially-distanced visit, met her dog B, and then we went to a very late lunch at a local taco shop. I first met K in 2003 when she arrived in Macedonia to serve as a Peace Corps Volunteer, where I had already been posted for the prior year. After her service ended we traveled to Turkey together, and when I returned from Australia, we lived in DC near one another for several years; in fact, when I moved to DC in late 2006, she had vacated her studio apartment for a one-bedroom upstairs so I could move into something reputable and affordable. She helped V and I move in together in late 2007, and she helped us move out of DC to Virginia in late 2009. In 2013 she stood up as a bridesmaid in my wedding. In other words, she is a terrific friend. I had wanted to tag along on one of her frequent business trips to Israel this fall, since she has been heaps of times and I have never been, but unfortunately the pandemic put that on hold too.

K relocated to Texas several years ago for work, and I have been meaning to visit ever since. It was only a few hours, and I had to stay mostly away from her, but it felt so good to see someone I care about in these extraordinarily frightening and lonely times. And now that I will be in the area for the next couple of years, at least I know we will get to spend more time together – once we are all vaccinated against the horrible COVID-19 virus. We already made a pact to explore some new places in Texas or New Mexico together. 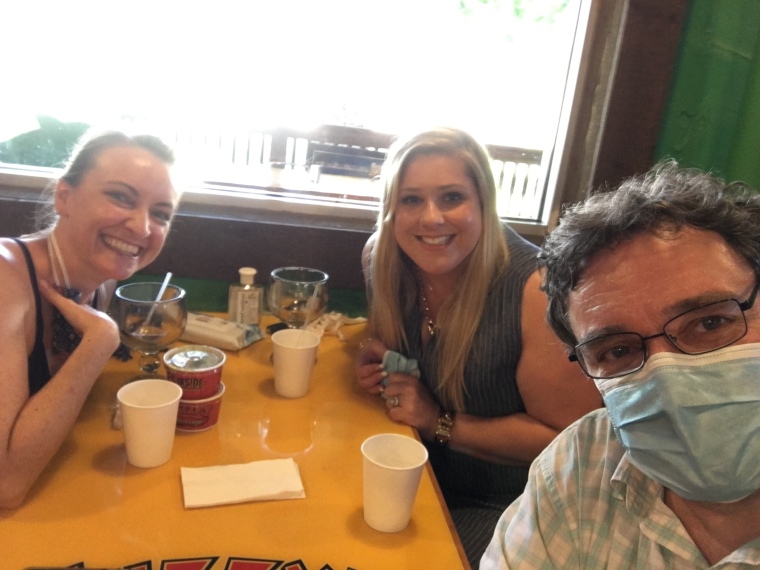 When we left Fort Worth we continued on to Abilene, where we stopped for our final night on the road, and by the looks of it, hardly a moment too soon. Bolts of lightning zippered the sky open as we raced toward our hotel, and it wasn’t more than a few minutes after we had unloaded and made it safely inside the Hilton that an epic deluge ensued. I had half-expected a tornado or something really crazy to descend upon us, given how unreal the sky looked. You know, because, 2020. 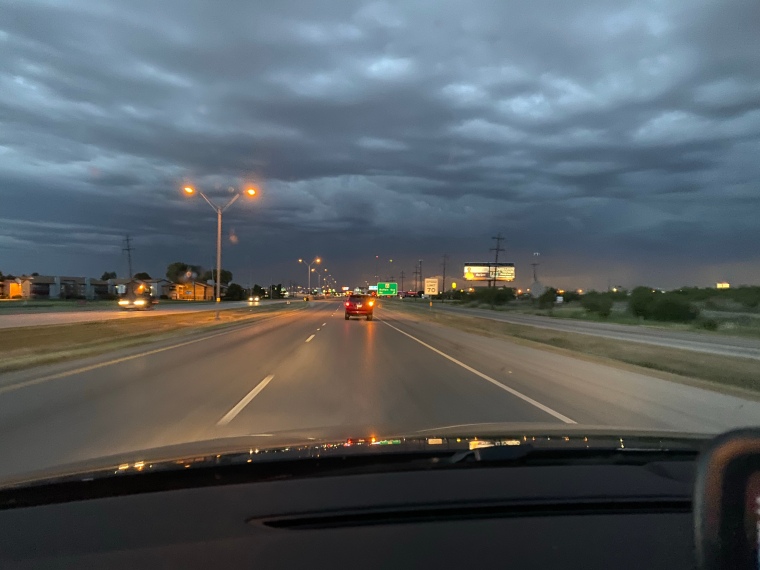 Rolling into Abilene had me in awe

We woke up early Friday morning, showered, ate breakfast, reloaded the cars, and got on the road around 09:00. It was to be the biggest driving day yet – not because of the 450+ miles, but because we would meet our social sponsors and cross the border into Mexico, at last, almost three months later than we had originally planned to arrive at Post. (My transfer eligibility date, or TED, was for May, which technically means anytime between April 1 and June 30, but of course the pandemic had cancelled our April 25 move.) As we didn’t want to arrive in the dark, or spoil our sponsors’ family dinnertime, we were prepared to really haul ass in the final push.

V driving Hilde, leaving me in the dust

The first few hours outside Abilene weren’t exactly the prettiest, between the blasted moonscape appearance of the oil drilling land and the roadside truck stops, however, I actually found the desert landscape once we hit I-10W to be serene and beautiful in its starkness.

Somehow the picture I took of a freight train’s multi-colored box cars snaking across the cactus-dotted desert plateau didn’t come out, jagged red mountains rising in the background, hardy shrubs clinging close to the scorched earth, the Volkswagen ever present a quarter mile or so up ahead. I am sure there were armadillos, scorpions, and coyotes out there, but I didn’t see any. The sky stretched endlessly in all directions, white fluffy clouds belying the deadly heat. The occasional wild wind would roil up some dry brown dirt and turn it into a little dirt twister. A few spun devilishly high, like little dirt tornados, but I couldn’t catch one while driving at 80 mph!

And suddenly, before I was fully mentally prepared for it, El Paso rose up around us like a big mixing bowl of narrow freeway lanes, endless shopping and big box stores on either side, and off ramps destined for border bridges. Several miles after we entered the city limits, V suddenly called me and asked in surprise, “Is this El Paso?” It was more huge than we’d expected. We made our way to a calmer part of town and hit up an Albertsons to do a little grocery shopping before our sponsors met us to help us across the border.

Both V and I immediately felt a good vibe in El Paso. The air was hot and dry. The part of town we were in kind of reminded me of a weird cross between Nevada and San Francisco. We were smiling and feeling like, we will come here. A lot. We will find our places here. 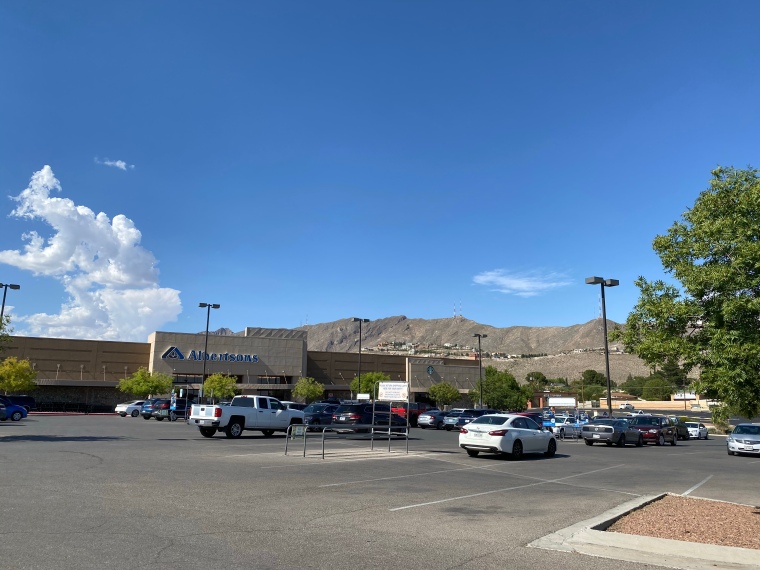 Not such a special-looking picture, but our first shopping trip in El Paso

[Speaking of El Paso, I would be remiss not to mention that one year ago today, a gunman shot 23 people to death at an El Paso Walmart, an unnecessary tragedy that our border community and the consulate took a moment of silence to remember this morning. The attack was especially painful for Mexicans and Mexican-Americans; not only were they hatefully targeted by the white supremacist shooter, but for those living just over the border in Ciudad Juárez, one of the most violent cities in the western hemisphere, the lost perception of safe shopping opportunities in El Paso, which paradoxically had boasted one of the lowest crime rates in the U.S., restricted their comfort zone even further. We are #ElPasoStrong.]

Not a lot of room for groceries, but with pandemic-related delays in diplomatic shipment customs clearances, we rolled with as much stuff as possible!

Our sponsors came and led us to the Stanton Bridge, one of four land crossings between El Paso and Ciudad Juárez. As we approached the border, police were directing traffic. Our sponsor R had said the traffic was light, but we still managed to all either miss lights or have cars jam in between us. V ended up three cars behind me in the Volkswagen, and I gave him a quick call while we waited in line to say that if we got through first, we would pull over and wait.

On the final approach… see the flags flying?

If you follow these things, you may know that due to the spread of COVID-19, the Department of Homeland Security (DHS) has temporarily restricted travel across the U.S.-Mexico and U.S.-Canada land borders, and has extended that restriction a few times, most recently until August 21 due to the pandemic. However, some traffic is permitted to go back and forth and U.S. government personnel on diplomatic orders are exempt from the restriction.

R had jetted into a lane I couldn’t yet access and disappeared. I knew he was somewhere ahead of me, and that V was somewhere behind, but I couldn’t see either of them. I paid my $3.50 toll required by the U.S. side and drove up and over the bridge to the Mexican side. It was somehow steeper than I had expected. The American and Mexican flags flew side by side in the center of the bridge.

On the final approach… Open / Abierto

As I pulled into an empty “nada que declarar” lane, I waited patiently as the camera snapped my photo. I had expected some interaction with customs or immigration officials, but instead I sat behind the wheel, enjoying my air conditioning and drinking a soda fresh from Albertsons, mask at the ready. A red light would mean an interview and potentially a vehicle inspection. A green light would mean simply proceed through. I stared at the two black bulbs and waited.

The green light came on, and the arm raised up. I drove through, and pulled up behind R about 50 yards away. He gave me the thumbs-up and I returned it. I looked back and saw V enter the same lane I’d just passed through. I watched him sit there for several long seconds, then saw the arm go up, and as he approached in my trusty old VW Hilde, he flashed a thumbs-up. I fought the urge to photograph V crossing the border, as two heavily armed guards glanced my way once, and then again. I put my phone down. R proceeded away from the border towards our house, and we trucked along behind him, trying to keep up.

We were in Mexico.

1 comment for “Juárez or Bust, Part IV: Across Texas to the Border”