During the past few weeks, the amount of coursework and difficulty of my Spanish class has started to accelerate. Our tasks have become more complex, at least for me. I have found myself more frustrated that my performance in class activities does not seem commensurate with the amount of effort and study I put in. I also feel mentally tired, experience procrastination and brain freezes, and need more alone time to recover. Of course, I am not bad at everything, and I have good days and bad days. I guess it is typical at this point to think you suck when you’re actually doing OK. The whole two steps forward, one step back thing.

I don’t recall feeling as “on” all the time during my FSI Russian class (2014-2015). It wasn’t easier, but our activities felt less intensive. The expectations were also definitely lower. However, I have also been heartened by a couple of special opportunities to help my learning – an invitation to a side course in consular Spanish, and a possibility to travel to South America on an immersion language trip.

It’s getting tougher. At this stage, we are spending less time watching cutesy videos and playing vocabulary games, and more time reporting the news and talking extemporaneously at length on a variety of work-related topics. This started to intensify over the past few weeks. It almost felt as though I had missed a couple episodes of a show and then tried to figure out how everything got to where it was. I have a lot of resources, but still find it hard to marshal them all in a meaningful way. I watch my classmates do a great job of synthesizing the enormous amount of information we get thrown at us, and ask myself when am I going to feel like I’m there.

What did I just say? I prepare talking points on topics that I then promptly forget. I either have to read them off the page, or I wander through a tortured explanation of them that lacks coherence and structure. My verb conjugations and syntax are a hot mess – but inconsistently. Sometimes I do really well, and sometimes I am almost speechless. The phrase “que demonios” (what the hell) often comes to my mind when I hear myself talking.

My efforts feel like the wrong thing at the wrong time. If I make several hundred flash cards per week, I suddenly feel called out for messing up on numbers. So I pivot to focus on numbers, and am caught off guard that I have forgotten the difference between the past tenses. So I circle back to that, and realize I have been goofing up all the stem-changing verbs. I spend hours typing scripts on different topics, recording them to try and get a more objective sense of how I sound, memorizing new things, and I feel good. Then the next thing I know, we get quizzed on vocab and I feel like I have yet again dropped the ball. One of my classmates reminded me that whatever study and learning I achieve, whether I bring it out in class or not, is all worthwhile because it’s something I will take with me. It helped to hear that, especially when it seems more and more that the burden is on us to learn independently to prepare for class, rather than learn in class and further it on our own.

Tripping over my tongue, or worse? There are moments when my nearly five prior years of Spanish helps. Then there are other moments where I trip over my tongue. I learn grammar rules, and then I forget some of them. My discussion of the environment, or cyberterrorism, or economic treaties, or whatever else we are talking about, sounds not only primitive in syntax and vocabulary but also in organization and substantive content, and that really gets under my skin. Because it’s one thing to have difficulty expressing oneself in your fourth language, and another altogether to feel dumb as a human being for not being able to explain things better. But I honestly don’t really enjoy discussing politics or having intellectual policy debates with people (says the former political officer!), and so depending on the topic it can be torture to share an opinion about something that I would ordinarily consider private.

But I’ve kept up the positive attitude overall, and my reading. A positive and cheerful attitude is what I always have going for me. Even when I feel dumb or on the spot, I’m impervious to it at a certain level. I am there to learn. I engage in all the activities, even role plays which I used to dread, with humor and 95% of the time without complaint or debate. I always feel a little relieved when we can do something that doesn’t involve being too on the spot, even though I never refuse to do whatever I am asked. I’m still also reading the beginner level books from the library, but I enjoy them. Any introverted activity that lends to my learning at this point I’ll take.

A few of the books I have read lately – I’m up to reading much longer books even if still beginner level. I also read a book called “La Chica de los Zapatos Verdes,” a creepy whodunit involving child abuse and the strangulation murder of a young woman

Success is not a zero-sum game. And this is the reason that despite my estimation that both of my classmates are ahead of me in generating speech and reading comprehension (mostly because of their past language experience and perhaps superior study habits), I try not to let it get me down. They deserve whatever success they earn and I will find my way too. I got a score ahead of where we needed to be at our five-week progress evaluation. I am a strong tester, and I went out of my way to cooperate with the testing process when it came to the niceties of conducting interviews, the friendliness of engaging a stranger in conversation, of being vulnerable enough to try, try again. When my supervisor read me the long and detailed list of skills I had demonstrated in the evaluation and how it corresponded to my score, I felt relieved that it seemed as objective as it did. So much of communication is about what you can do with the language, but there is also a lot of getting out of your own way on a psychological level, too.

The language belongs to anyone who wants to speak it. Sometimes I procrastinate studying because I feel intimidated. But once I start, I generally think, Well this isn’t so bad. And yet when I saw this meme yesterday, I almost died laughing because it rings so true. 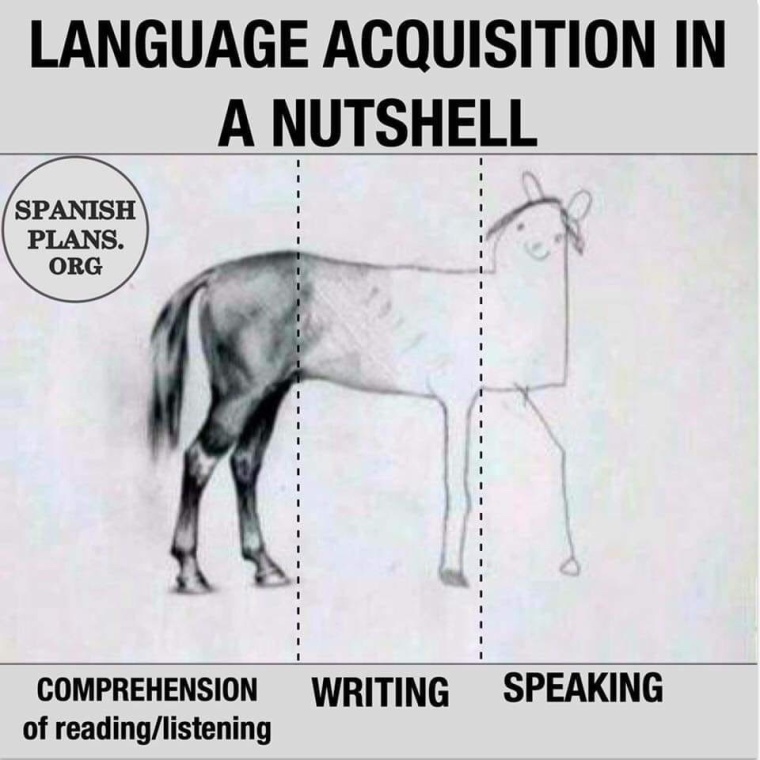 I can’t stop laughing at the front of this horse – some days my spoken Spanish is *even* dumber than this!

Boldly forward. There is no way to take off time to catch up or even get ahead. I think we always feel behind to some degree. We just have to forge on and show up to do our best every day, whether the day before was a day where we studied, did our assignments, and held it all together, or not.

More learning opportunities are on the horizon. Because of my score at the first progress evaluation, I have received an early invitation to the American Citizens Services Spanish consular language program, which will be starting soon. It will be a lot more work, but directly applicable to the kinds of situations I will face in my next job, for example, making citizenship determinations and visiting Americans in jail, in the hospital, and in the morgue. In addition, I have a tentative approval to participate in the FSI Spanish immersion program for two weeks this winter in South America. I am really looking forward to visiting a new country and working one on one with an instructor to improve my Spanish before my end of training test (EOT) in late February.

V started a new job over a month ago, but has continued his studying via the FSI Spanish weekly distance learning (DL) program. It is a great resource for Eligible Family Members (EFMs) who want to learn some Spanish, but can’t attend a full-time classroom environment because they work or have other obligations.

And so we continue the march towards our departure for Mexico next spring. May I be worthy!!