After wrapping up our second diplomatic tour in Australia, we spent the entire month of August on mandatory home leave in the United States, where I hadn’t been in 25 months (my longest time out yet).

As I described in my previous post, we spent the first week of our four-week home leave in Honolulu, Hawaii, where neither V nor I had ever been. We drove just over 300 miles around the island, and then we flew to California, where we threw our eight suitcases into a Nissan Pathfinder and spent three more weeks visiting family, friends, and touristing our way through California, Oregon, and Washington. Here are a few snapshots and highlights from the “mainland” part of our home leave, in which we drove 1,700+ miles through three states, after flying 7,683 miles from Canberra to Sydney to Honolulu to Sacramento.

Visiting northern California was special for me, because I grew up there, and most of my family still lives there, including my mom, my Nana (who turned 90 this year), my brother C, my niece A, and aunts, uncles, and cousins on my dad’s side. 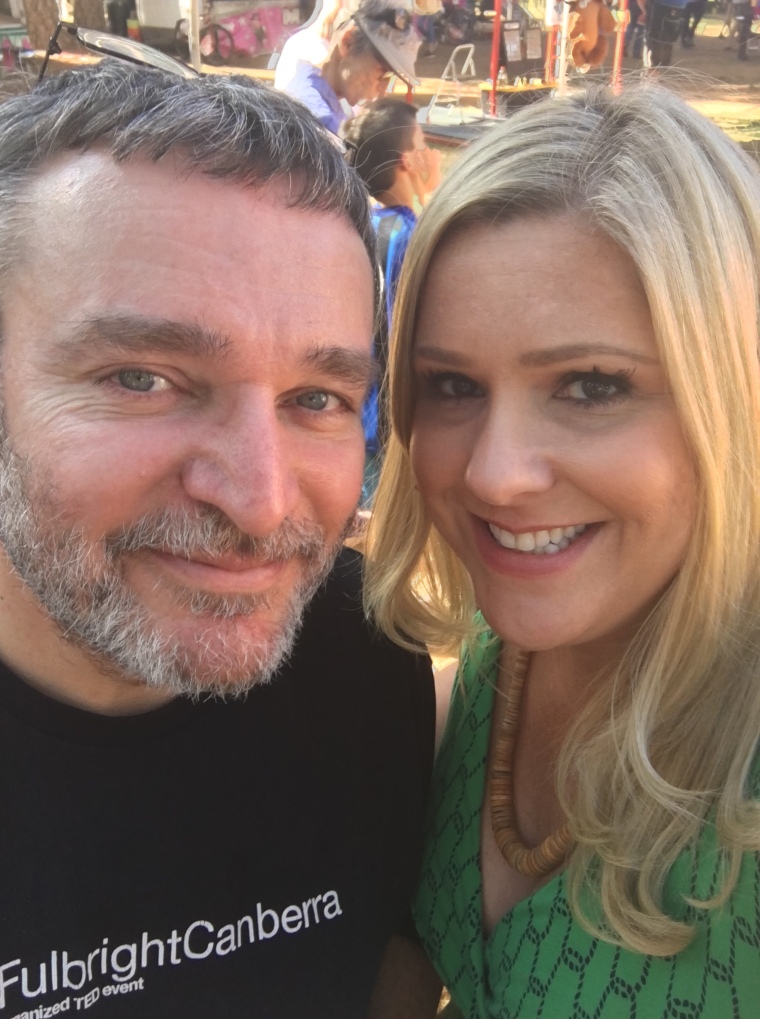 We got to spend quality time with them – bowling, backyard grilling, visiting the county fair, and going out to eat. I also spent some time with my mom going through boxes of old school papers and drawings she had saved. 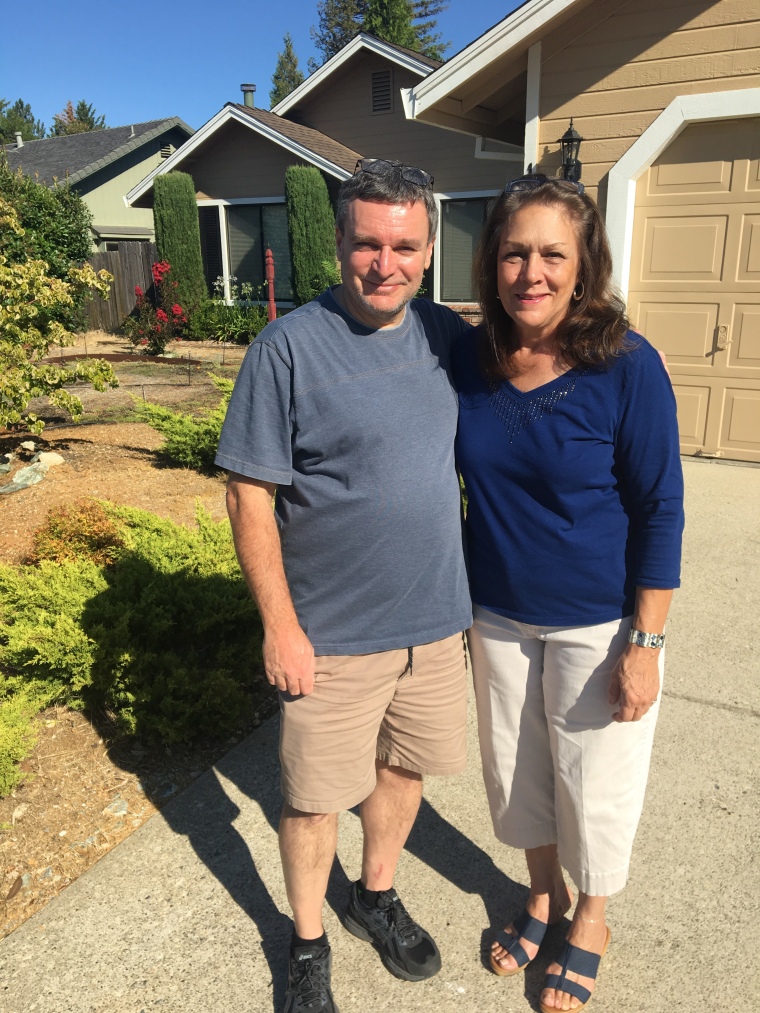 V with my mom

V and I also went swimming in the South Yuba River, a tradition when we’ve been in my hometown in summer. The cool, bottle green swimming holes at Bridgeport are always worth the hot, dusty, and sometimes precarious climbs and hikes downward to reach the uncrowded spots. 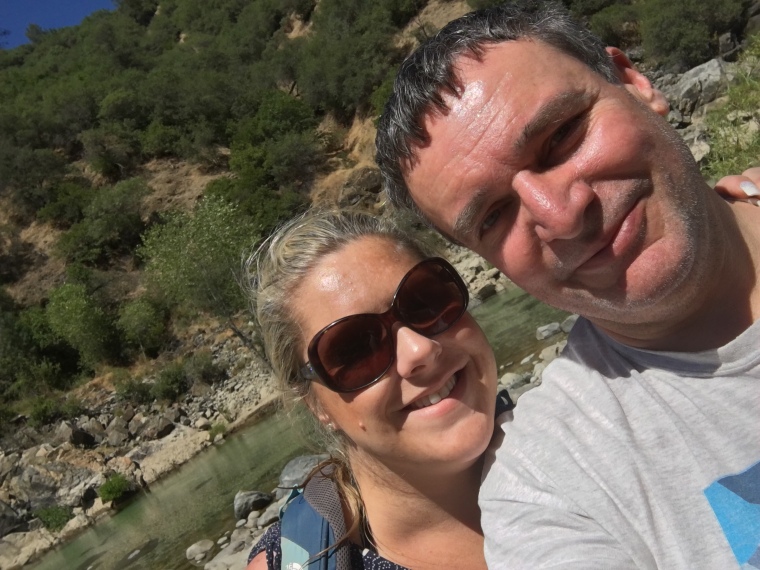 We also went down to the Bay Area to spend a special couple of days in San Francisco, the city where we got married in September 2013. 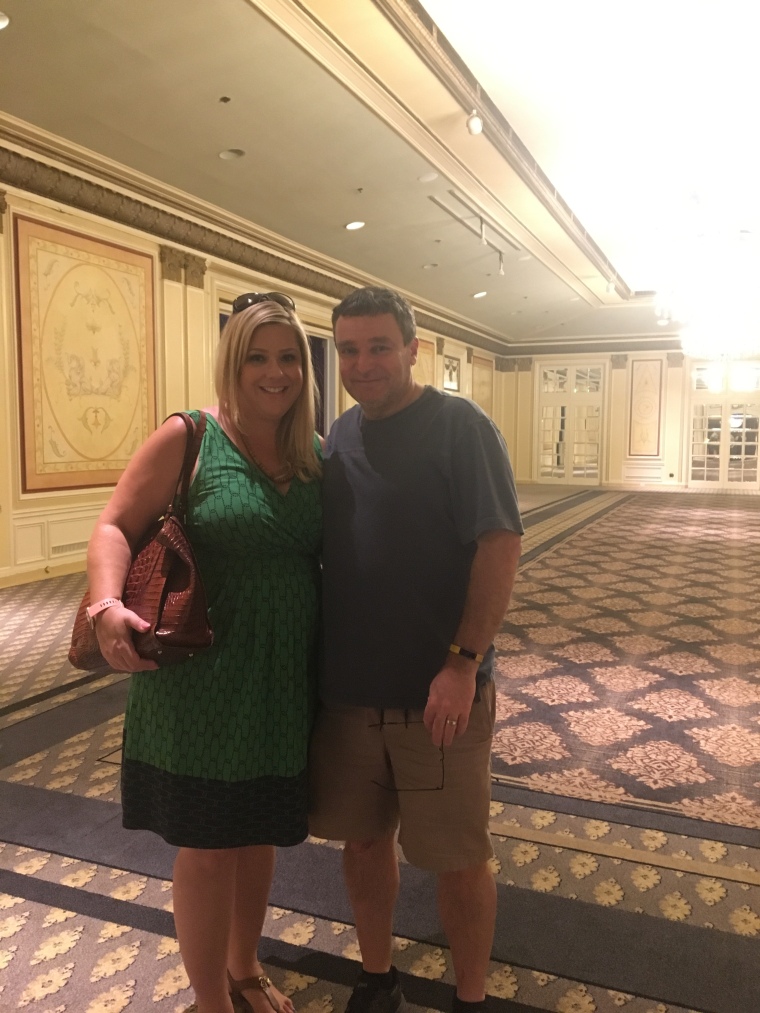 We hadn’t been back since our wedding, so staying at the Sir Francis Drake and checking out our reception ballroom, going back to St. Matthew’s, and riding a cable car again brought back such fond memories. Hard to believe it has been nearly six years. 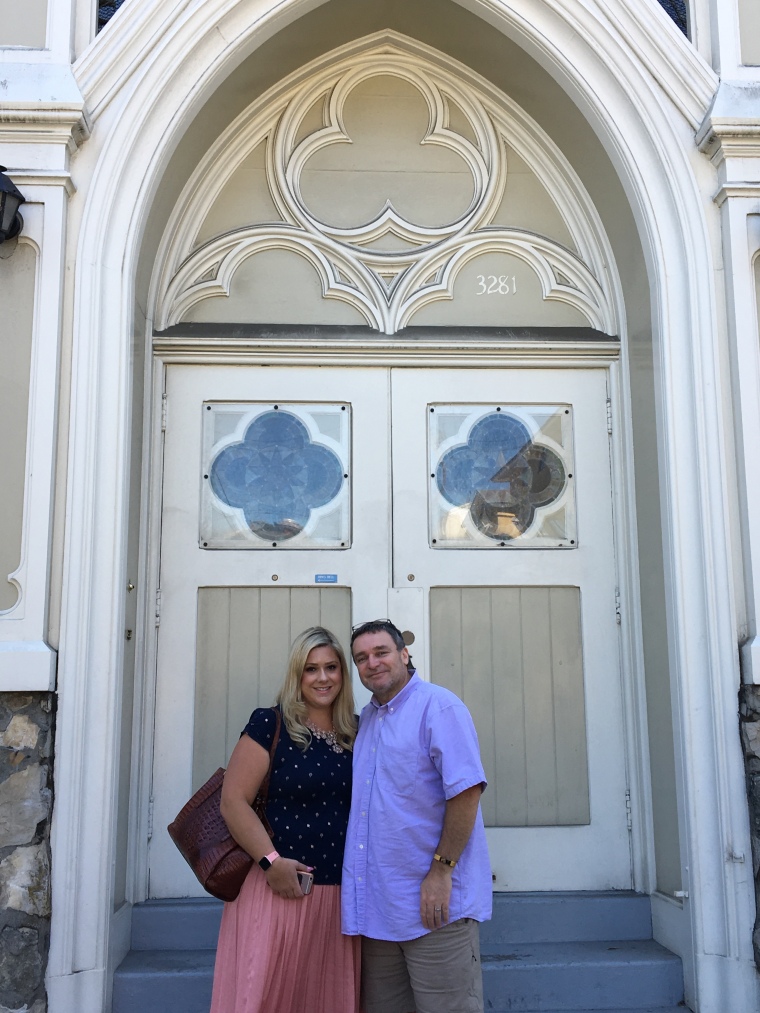 Sadly, the church was locked so we could not see or go inside, but we stood on the steps and offered a prayer, focusing on the feelings we had felt the last time we stood in that same place, and asking for strength both as individuals and in our marriage, as we move forward to our next challenges together.

At my cousin’s wedding

While in the Bay Area we also went to a family wedding, an A’s baseball game where we watched the A’s clean the floor with the Astros, went to Alameda to eat on the water, and enjoyed plenty of awesome Mexican food.

The view from Pasta Pelican

Take me out to the ballgame…

Our AirBnB in the Oakland hills had some pretty incredible nighttime views of the Bay Bridge and San Francisco that I drank in each night with a glass of wine.

Not everything here was perfect, but it was a terrific house all the same!

In 2018, my dad and stepmom relocated permanently from California to Washington state, and this was our first trip to visit them in their new home. Because they live close to the Oregon border, we went back and forth several times between the two states.

One of the great things about renting a big SUV on this home leave was the ability to roll comfortably with all our luggage, groceries, and extra laundry and household essentials in case our AirBnB was missing anything. We never felt crowded in the car, and its size made us feel safer (especially because I accidentally drove on the wrong side of the road a few times, but only for split seconds!).

When we left California, we drove several hours north (a little over halfway to my dad’s) and then stopped for a couple of nights’ break in Canyonville, OR at the Seven Feathers Casino Resort. I am not much for “gambling,” but I do love to play games of strategy like video poker (even just on my laptop and not for money). V and I played video poker, went to the gym, ate whatever we wanted, and I had a wonderful massage and facial at their spa. It was a great place and I look forward to going back – and I even won a few bucks too!

While we were at my dad’s we enjoyed some well-deserved downtime and nature.

Swimming in the river behind my dad’s property – chilly on an uncharacteristically hot day in the Pacific NW!

We also went to the movies, went on walks, ate delicious food, went a few times to my dad and stepmom’s second property which they are preparing to rent out, and took a side trip to Astoria, where two of my favorite childhood movies The Goonies (1985) and Short Circuit (1986) were filmed. While in Astoria, we visited the Columbia River Maritime Museum, including the floating lightship, the Astoria Column, and the Fort George Brewery, where I almost cried over a delicious lightly toasted worker’s burrito.

Crossing with our car on the ferry from Washington to Oregon

Looking across the Columbia River at Washington state 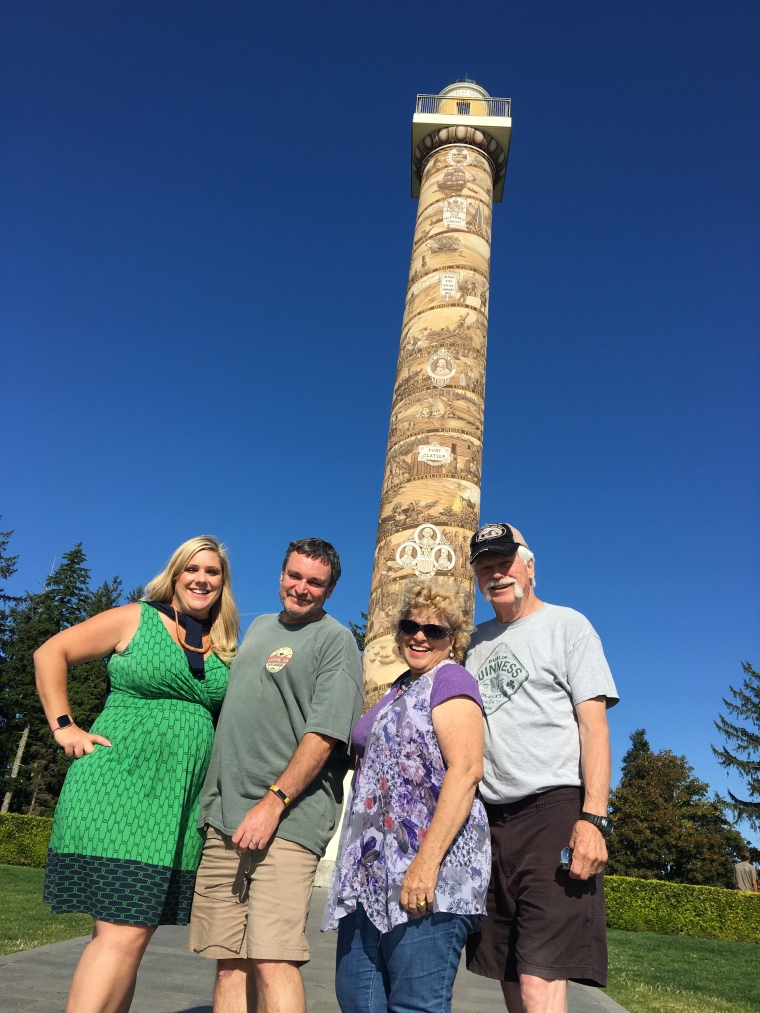 My dad at the covered bridge in Grays River, WA

Because my dad and stepmom are less than 90 minutes from Portland and just under three hours from Seattle, V and I made side trips to those cities and even hosted a reunion with several of my Peace Corps Macedonia cohort who live in and around Seattle.

Of the original 20, getting several of us in the same place at the same time is pretty amazing!

The view from our roof

While we were in Seattle, we also finally made it to the Space Needle (on our 2017 home leave we had plans to go, but I got food poisoning and had to skip it).

I am always attracted to these sci-fi looking towers!

We tried not to look down…

Since we flew out of Portland, we saved that city for last. We only had two nights, but we visited the Portland Saturday Market, the International Rose Test Garden, and the Portland Japanese Garden. We also did a little bit of last-minute shopping, and of course, ate excellent Mexican food! 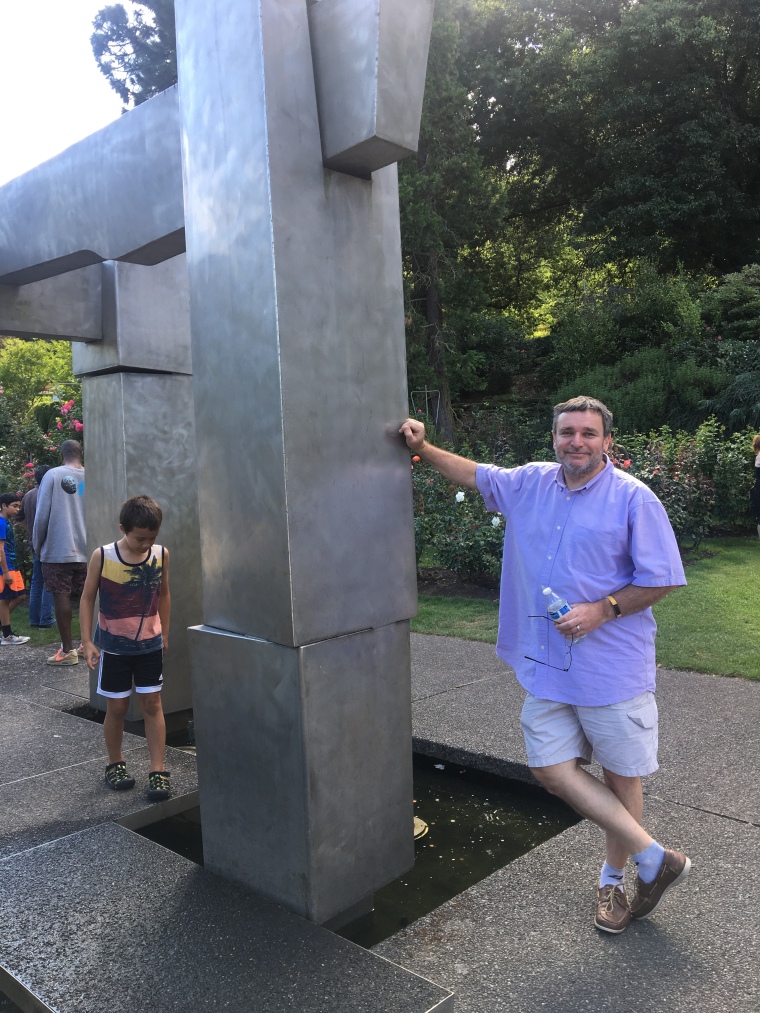 I feel like in the interest of honesty, I should add a disclaimer that there were a few stressful times during this home leave, because the photos never tell the whole story. Like unexpected and totally unacceptable problems with a couple of our AirBnBs, the stress of me scraping the front end of the Nissan in a tight parking garage in Seattle (something I still can’t believe actually happened), and my aggravation with bureaucratic changes to U.S. insurance procedures around obtaining specialty medications, which caused an unexpected three-week delay in getting my Enbrel which they *insisted* on shipping to me *even though* their client base is Foreign Service Officers and I *told* them I was between addresses and traveling across the country. Grrr. Also, endless robo and telemarketer calls day and night that I had to install an app to block. What the actual hell, America?! It is weird coming back to a country where you haven’t really lived for four years to see how things have changed. And there were also a few days where I felt a little down, lethargic, processing through different aspects of my life and reconciling myself to the fact that our time in Australia had ended.

However, the great thing about this home leave vs. our first home leave in 2017 was that I had planned it all in advance, saved up money for it, and paid for almost everything months in advance to avoid as much financial stress as possible. We also made a better balance this time between spending time together and spending time with other people, something that is important for a couple of homebodies who have lost a home they loved. In the end, it was terrific, and spending the time with my family felt just as precious but at the same time more relaxed given that for our next tour, we aren’t going somewhere as far away as Central or Southeast Asia. Given that we will be on the East coast for several months and then in Mexico, I’m expecting that we will be around a lot more often in the next few years.

On the first day of September, we flew from Portland to Dulles, VA to begin our lives again. Home leave is officially over, and so are my years as a first and second tour (FAST) officer. The next challenge: learning Spanish to prepare to move to Mexico! Collecting Postcards is back in the U.S.A…. 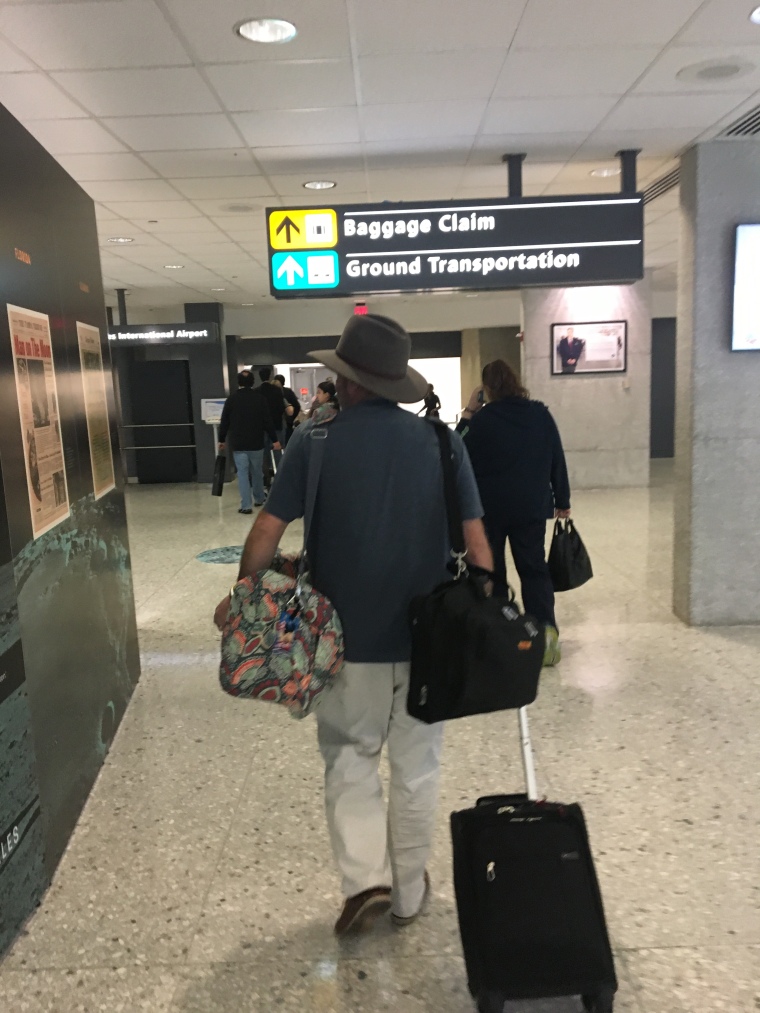 Australia and the West coast in our hearts, but coming into Dulles like #VAweareback

2 comments for “Postcards from Home Leave 2019”