Whenever there is a three day weekend – be it for a U.S. or a local holiday – I’m generally keen to go out of town, taking advantage of an extra day off without using leave. And back in August, I’d planned ahead for a quick getaway up to Brisbane, the capital of Queensland state, for the Veterans Day weekend.

With a population of about 2.5 million, Brisbane is Australia’s third-largest city, after Sydney and Melbourne. The closest I got to Brisbane previously was my fun work trip in August to Gold Coast, a half hour or so south.

Brisbane at night from Victoria Bridge

We were lucky enough to have an exit row all to ourselves for the 1 hour, 45 minute flight. (If you were to make the drive from Canberra to Brisbane, you’re looking at 13 hours plus any stops.)

We arrived on Saturday morning and checked into the Treasury Hotel and Casino, a riverfront, Italian Renaissance-style building constructed between 1886 and 1928 as a government building and much later converted.

Sadly for us, we didn’t find any video poker among the slot machines in the casino, but we did note the breathalyzer machine in the parking garage (!) and enjoy some incredible Korean BBQ before a brief walk crashed into a nap.

That night, we enjoyed some riverfront cocktails at Eagle Street Pier followed by a three hour paddleboat dinner cruise on the Kookaburra Queen I.

The online reviews for the dinner cruise had been somewhat mixed. Yes, the boats are 30 years old and not well-heated or cooled. And yes, the entertainment is a guitarist belting out hits from Jimmy Buffett and The Eagles (but fairly well, I might add).

Although I think I would have been OK if the cruise ended 30-45 minutes earlier (only because I was sleepy), I have to say that I am SO glad we did it. The food and drinks, the wait staff service, and the beautiful views along the Brisbane River were all impressive and very enjoyable. We commented to each other repeatedly how glad we were that I had decided to book it after several weeks of debating. 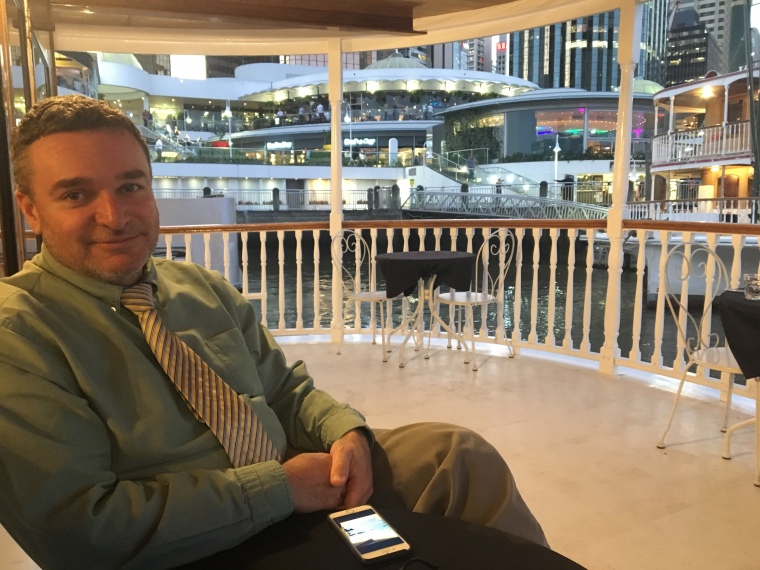 We actually sat on the outdoor deck, per my prearranged request (it costs a little more for a guaranteed table for two, but I get tired of the forced conversation of sitting at group tables sometimes). It probably would have been too cold or windy out there for some people, but given my relatively severe propensity for motion sickness, it was perfect! Had we sat inside, I know I would have been too hot, and too much at the mercy of all the noise and crowdedness. Being alone outside with V, right by the railing, was perfect. 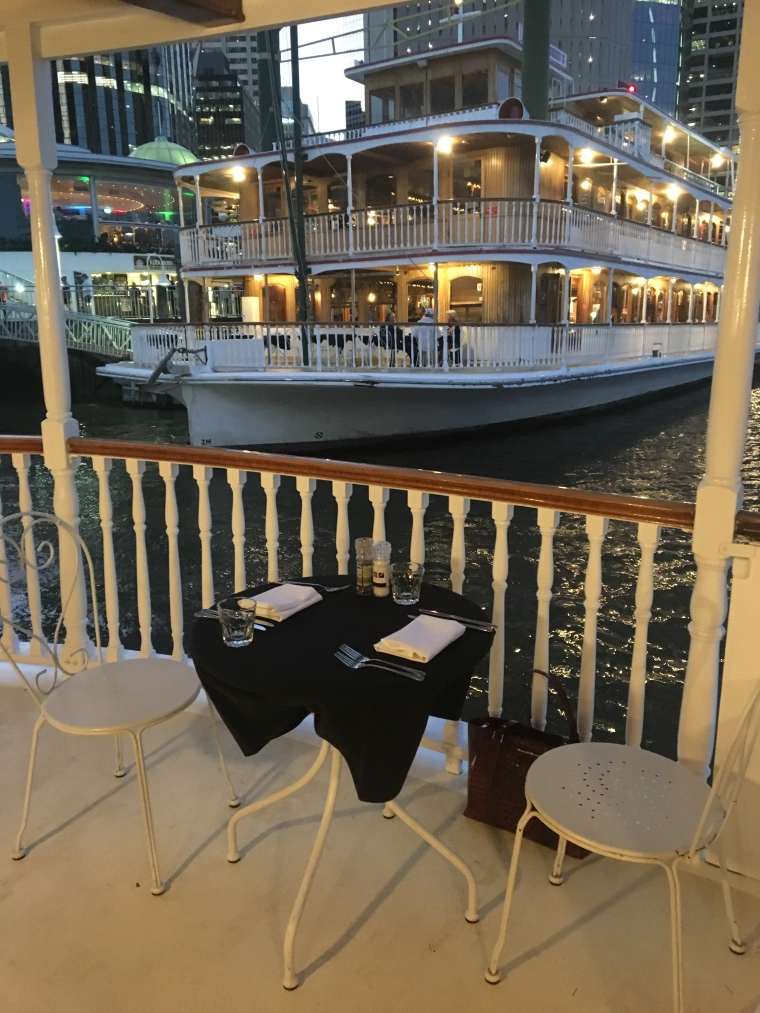 Our table, with the Kookaburra Queen II in the background

It was a little hard not to overindulge in the delicious buffet – it was all so tasty that I had to try just a bite of everything!

It was fantastic to glide along the river, waving to people above on the many bridges and checking out the riverfront real estate.

Even if dinner cruises or boat tours aren’t your thing, I can wholeheartedly recommend this tour as a peaceful and convenient way to see Brisbane from a riverboat perspective. The Kookaburra Showboat Cruises company also does lunch cruises and high tea cruises for those who would rather sail during the day.

On Sunday, we strolled across the Victoria Bridge from our hotel and down to the South Bank to check out a manmade beach. On the way, we ran into the iconic Brissie sign and a Nepalese peace pagoda.

We stayed at the Streets city beach for a couple of hours, and then found ourselves some lunch in the shade.

At night, we walked back over the bridge and for over an hour through the West End, a dynamic and vibrant neighborhood jam-packed with cafes, restaurants, bars, shops, and breweries, hidden in alleys and nooks, lights dangling, glasses tinkling, music spilling out onto the street in the warm night air. 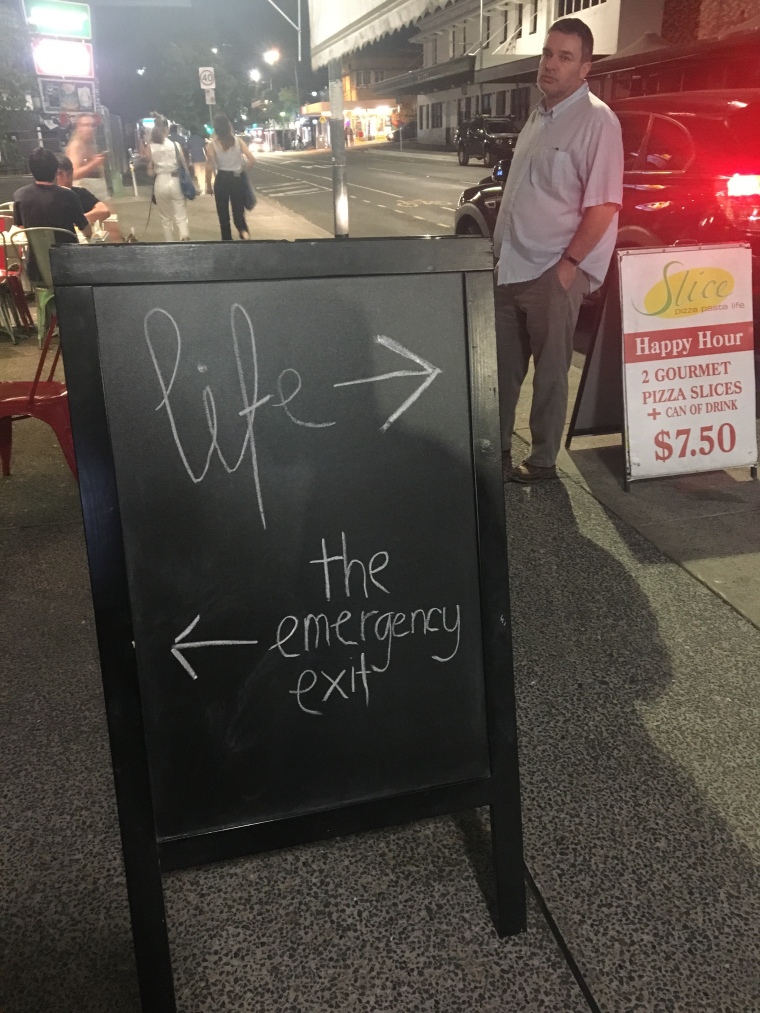 What does it all mean…

We found some decent Mexican food, in a restaurant owned by – Mexicans! Delicioso and so rare in Australia. This did not happen by accident, friends – I had done some research and as the Aussies say, ‘made a booking.’

On Monday morning, we woke up early and took a stroll to City Hall, where we saw the iconic Art Deco clock tower built between 1927 and 1930. We arrived a wee bit too early for the free tour (my bad), but at least we got to see it from below.

Then we headed to our final destination, and one which I was really looking forward to – one of Brisbane’s most-visited tourist attractions, the Lone Pine Koala Sanctuary.

All of our favorite Australian animals were there: sulphur-crested cockatoos, laughing kookaburras, dingos, Tasmanian devils, kangaroos and wallabies, and of course – tons of koalas.

Right before something spooked them and they all scattered!

Going to see the native wildlife has been one of our favorite things to do here. Unlike ‘zoos’ in a lot of places that kind of make me sad, Australia boasts many private zoos, animal sanctuaries, and reserves where you can tell the animals are well looked-after, and people are allowed to interact with and engage them in a way that is safe and healthy for both visitors and animals.

…and this little soft one didn’t mind a cuddle! I am so happy that V, who is such an animal lover, has been able to experience the joy of Australian animals up close and personal. I did quite a bit of this when I lived in Australia previously, so for me it’s a bonus and something I can share with him. I know it is something we will remember fondly when we’re elsewhere someday.

I felt pretty tired and run down overall on the trip, which was too bad, but still enjoyed myself and managed to get in nearly 15K steps per day. All in all, it was a fantastic and low-key trip to Brisbane, a city I highly recommend visiting!

3 comments for “Weekend in Brisbane”