Thursday, May 21 was a day I intersected the sun while flying thousands of miles east. As midnight struck on the east coast of the United States, I had already set my watch six hours ahead and arrived in Frankfurt, the only time during that day that I held still for a few hours.

My first glimpse of Central Asia as the sun passed quickly overhead and fled west behind us looked like this: 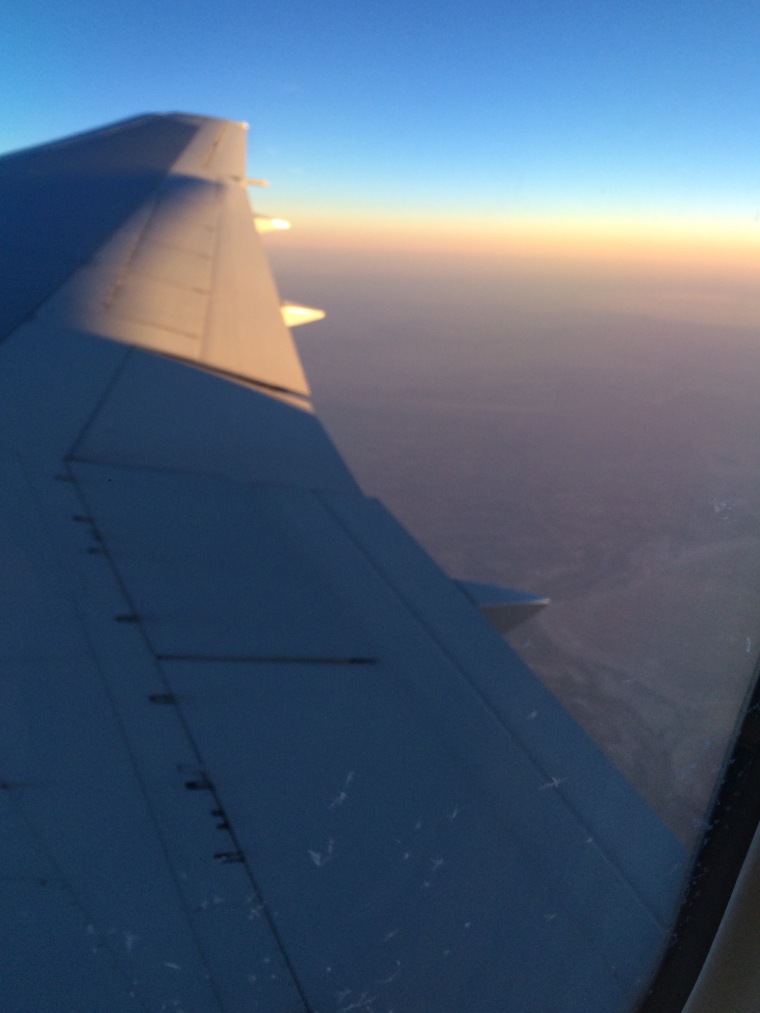 I kept my eyes on the flight info screen as our destination drew nearer.

I had abandoned podcasts for music by that time, and while my iPod shuffled through electro house, 80s and classic rock, Huey Lewis and the News’ “Heart of Rock & Roll” was playing as we finally touched down in the dark, nearly an hour late and just before 22:00.

Strangely, I felt relaxed and happy, albeit tired and somewhat punchy. I didn’t really feel nervous and miraculously, I did not feel even remotely airsick. People who know me well will realize the magnitude of this luck!

I somehow had an impression that I had come home, even though I had never been there before. I think I just mostly wanted to say hello to my sponsors, and then lie down on my stomach to sleep as soon as possible. All of this chair sleeping is not for me.

When I got off the plane, I proceeded through passport control and met my sponsors, V and D. I also met a couple of other embassy employees who happened to be at the airport at the same time.

Both of my suitcases arrived unscathed and we proceeded outside to where an embassy SUV was backed in only several yards from the exit door. My bags were loaded, we piled in, and off we went into the air-conditioned night. I think the ride from the airport to my home was approximately 20-25 minutes.

As we rolled through the streets and I chatted with my wonderful sponsors, I tried to see as much of Tashkent as I could in the darkness. In many ways it reminded me of Skopje on a summer night. At nearly 22:30 I could still glimpse small Soviet-era cars, brightly lit shops, and people strolling. I delighted in all the familiar (Russian) and the unfamiliar (Uzbek) signs that I saw.

When we arrived at my three-story amazing house, my sponsors gave me a tour and showed me how to use the various sets of keys.

I think my house is at least 3,000 square feet?! It has a large gated front yard with stone and grass, an eat-in kitchen, a dining room, a living/sitting room, two and a half bathrooms, an office, a laundry room, a utility room, a consumables pantry room, and six large bedrooms. All of the ceilings are 15′-18′ too, which makes it feel even more huge! I’ll talk more about my house in another post, but suffice to say for now that it is huge, beautiful and brand new.

My sponsors stayed for 45 minutes or an hour to answer some of my initial questions, explain how to use my different phones, and show me how features of the home worked.

When it became obvious that we were all too deliriously tired to talk further, I walked them out. As I locked the gate behind them and looked around my lit-up walled front yard, complete with spotlights, a patio table and new green grass, such a surreal feeling of comfort washed over me. The warm, dry spring evening had me convinced for a moment that I was in California.

Although my intention was to go to bed immediately, I stayed up another couple of hours until about 01:30 on Friday morning, May 22. I made a sandwich, placed some phone calls (awesome VOIP phone in my house to call ‘merica), and took a bath. Both bathrooms have humongous Jacuzzi-style tubs, so obviously it was great to get the “road dirt” off.

I awoke about four hours later, far before my alarm sounded. I tried to go back to sleep, but was probably too excited. I showered and put on a dress and a suit jacket. I even curled my hair and put on three inch heels (it seemed like a good idea at the time).

I made myself breakfast from the food my sponsors had organized for me (scrambled eggs and fruit salad), and re-organized my purse. The embassy sent a car to pick me up, since I hadn’t really had a chance to get my bearings.

Upon arriving at the embassy, I felt a swell of pride at seeing the enormous American flag hoisted outside.

I spent the majority of the day filling out paperwork, touring the embassy, and meeting new colleagues. As I arrived to the office on the Friday before a holiday weekend, it just so happened that the work day featured an awards ceremony and a Memorial Day barbeque. Everyone was so welcoming, and the embassy is absolutely beautiful. I was really happy to finally be there. I have heard time and time again that this small embassy community is tight-knit and friendly, and I can definitely confirm that is true. Everyone I met was full of tips to help me settle in and offers to help. I can only hope my sleep deprivation didn’t show too much!

It was a great first day, although I have to admit that when 17:00 rolled around I was absolutely knackered. I almost fell asleep in the motor pool vehicle that took me home. As soon as I closed the gate that leads into my front yard behind me, my head was definitely spinning.

I took off my heels, made a salad, and fell asleep on my couch watching some American movie on the Armed Forces Network.

It’s going to be a fabulous two years!