During this past week, I was in the State Department’s Mexico area studies course put on by the Bureau of Western Hemisphere Affairs (WHA) at the Foreign Service Institute (FSI). It was similar to the two week Russia/Eurasia course I did in 2014 while preparing for my assignment to Uzbekistan. Most area studies classes at FSI are regionally-focused, but the complexity, depth, and breadth of the U.S.-Mexico bilateral relationship means Mexico has its own dedicated course, and it was both useful and fun. Narcotics, crime, migration, American Citizen Services emergencies, difficulties in determining citizenship, film, art, culture, indigenous issues, trade, mariachi bands, and tacos – what else do you want?

The students in the course were mostly State Department Foreign Service generalists and specialists, but we had some interagency colleagues as well. The instructor had such deep experience with Mexico and was such an engaging character that I really felt like we were using our time wisely. (Thanks Dr. B.!)

We also had guest speakers from various functional and regional bureaus within the State Department (including from the Mexico desk, the Bureau of Consular Affairs, and the Bureau of International Narcotics and Law Enforcement Affairs), as well as from the Woodrow Wilson Center’s Mexico Institute, the Washington Office on Latin America (WOLA), and the Latin America Working Group (LAWG).

During the first half of our course, we focused on Mexico’s geography, demographics, and history, as well as contemporary political and economic issues, an overview of the U.S.-Mexico trade relationship, and a discussion on consular work in Mexico.

Later in the week, we focused on heavier topics like crime, cartels, organized crime and drug-trafficking organizations, law enforcement and justice issues, human rights, and impunity.

My favorite day was in the middle of the week, though, when we visited the Mexican Cultural Institute (MCI) in DC. Although it is located just two blocks from where I lived in Adams Morgan in 2006-2007 and I had walked by it many times, I had never actually gone in. I had no idea what I was missing!

The mansion was designed in 1910 by the Taft Administration-era Treasury Secretary for his wife, and in 1921, the Mexican government bought it to use as the Embassy of Mexico. In 1989 the Mexican embassy relocated to Pennsylvania Avenue, leaving the building available for the institute to establish itself.

These days, the institute is a non-profit that also functions as a museum and a performance space. The incredible murals were painted by famous Mexican painter Roberto Cueva Del Río between 1933 and 1935, and he returned to the U.S. to complete them in 1941. You can read more about the significance of the various murals and the history of the mansion at the link.

I loved visiting this place and being able to hear from the head of the Mexican embassy’s political section on how he sees Mexico’s priorities and the bilateral relationship.

Did you know? When setting up flag precedence for a international meeting or setting up flags inside your country’s embassy, when you’re facing front, your country’s flag always goes on the left and the host country or visitor flag always goes on the right. Had our meeting with our Mexican colleagues been at the U.S. Department of State across town, the flags would have been displayed in reverse.

And of course, I loved going out to a delicious Mexican lunch afterwards with the whole class before returning to FSI, too!

Me and another colleague who is also going to Ciudad Juárez teamed up for our final presentation – we chose femicide, or gender-targeted killing of women, which is an issue across Mexico but particularly in Ciudad Juárez and Chihuahua state. Chihuahua state topped the list of Mexican states for highest femicide rates at least seven times during the last 19 years.

Femicide is an issue that often gets both conflated with and overshadowed by the larger picture of violent crime in Ciudad Juárez. Last year, for example, an average of four people were murdered per day, albeit three times fewer than a decade ago. Men disappear and are murdered at higher rates than women; however, their deaths are often seen as incidental to the environment and/or their activities, whereas women tend to be murdered at very high rates by intimate partners, or kidnapped from public spaces and held as sex slaves before being dismembered and dumped in the city’s outskirts. Especially vulnerable are poor or transient women, many teenagers and single mothers, who have migrated from southern Mexico to work in one of the 330 maquilas (factories) that employ 280,000 workers, dominating Ciudad Juárez’s economy with the average wage for an eight-hour shift at USD $3.50.

In fact, every day across Mexico, an average of 10 women are murdered in gender-based violence. Women are angry and scared and fed up about the disappearances. The rapes and assaults that go uninvestigated. The murders that go unsolved and unpunished. The impunity with which men harm women, while society asks, “What was she wearing?”

It has gotten so desperate that women across Mexico are pledging to stay home and not participate in public or private life on March 9 (the day after International Women’s Day) in protest. 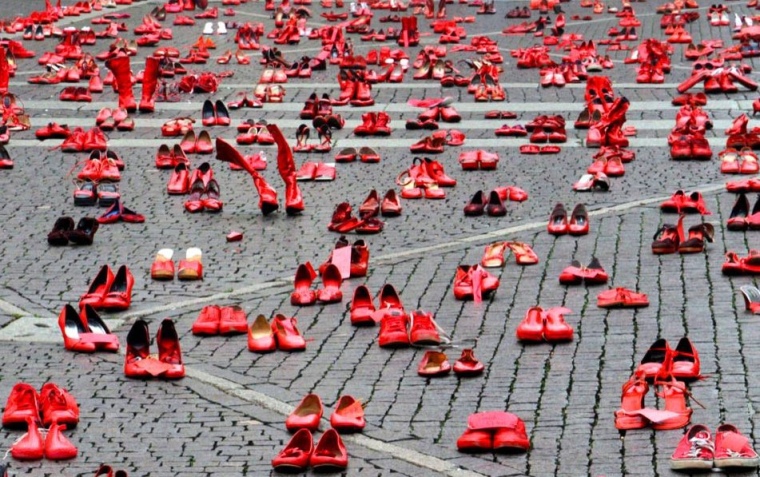 You can read a recent example of what Ciudad Juárez is facing at the link with the Ni Una Más / Ni Una Menos campaigns, or watch The Missing Women of Mexico: ¿Dónde Están? on Amazon Prime Video. Obviously, the societal impacts are really troubling and there were a few nights this week I had a hard time going to sleep after looking at missing poster after missing poster, and wondering how in the world it has come to this, especially in such a deeply Catholic country that reveres the role of the woman and the mother in the family. I keep thinking that in each pair of red shoes used to stand a girl or woman, proud, strong, out there trying to make the best life she could for herself and her loved ones. Her life mattered.

If you are posted to U.S. Mission Mexico (the embassy, one of the nine consulates, or one of the ten passport acceptance centers), or if your USG work stateside could benefit from a closer look at Mexican affairs, I highly recommend the area studies course.