This past May when V and I went to the Hunter Valley Food and Wine Festival, I saw a flyer for a hot air balloon fiesta to take place at September’s end. March was our first hot air ballooning experience in Canberra, an experience we both wanted to do again. So I bought our fiesta tickets almost as soon as we returned home, in anticipation of celebrating our fifth wedding anniversary in a hot air balloon over vineyard country. And last weekend, we did just that.

On this visit to the Hunter, we stayed in a different AirBnB, not because we didn’t love the place we stayed in May, but simply to try something new. It was a rustic two room cottage on top of Pokolbin Mountain, surrounded by flowers and overlooking a beautiful valley. When we arrived Saturday afternoon after nearly six hours in the car, we were not disappointed.

The place was incredibly beautiful and peaceful. A cattle and Cutting horse farm, lots of animals roamed about the hillsides, including wallaroos and five working dogs. Galahs, magpies, crimson rosellas, laughing kookaburras, and other native birds called from the trees. I also had a chat to the hostess’s father as he rolled by in a battered work ute, who said the property had been in his family for generations.

The cottage is up a narrow, winding dirt road with no lights and no guardrail that takes 8-10 minutes from the main road. Both nights when we returned from dinner, we saw a variety of roos and hairy-nosed wombats, including baby wombats, in the road. A couple literally jumped out at the last minute and almost gave me a heart attack.

On Saturday night, we called the prerecorded message to confirm our balloon flight. The instructions said to be at the meeting point no later than 04:15 a.m. the next morning. I was dumbfounded! I thought it would be 05:30 at the earliest. In any case, we arrived ten minutes early and within a half hour, our team of 16 passengers and pilot were on our way to the launch site. 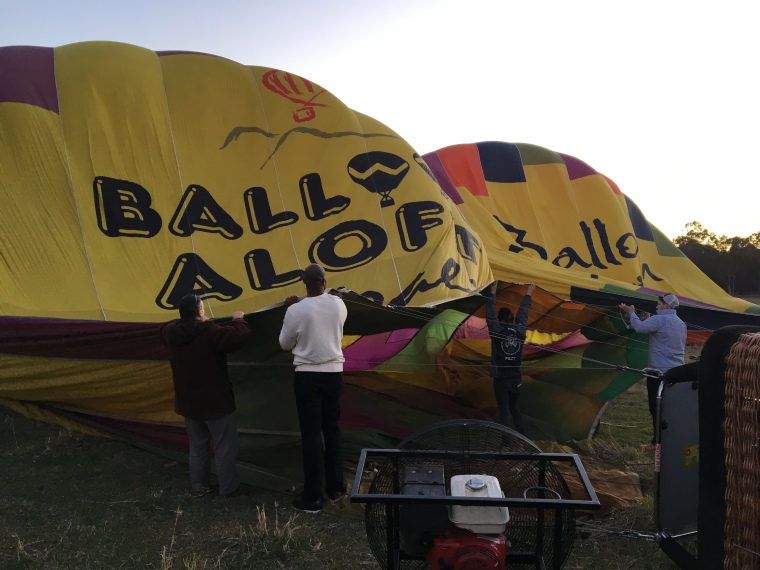 The thing that made this experience different than our first hot air balloon ride was the sheer number of balloons around. In March, it was us and one other balloon. (I took a LOT of pictures of that balloon!) This time, there were between 27 and 30 balloons in total! Hence, the balloon fiesta!

I was pretty impressed that all the different companies and private parties knew just how much space to leave between their balloons so when they were inflated, there would be room for everyone.

We got into the balloon rather quickly as the final part of the inflation progressed rapidly and the balloon could have taken off without us. For a few minutes it seemed like something was wrong (but it turned out just to be an onboard camera malfunction), and like the balloons that had lifted off before us, we started to ascend. 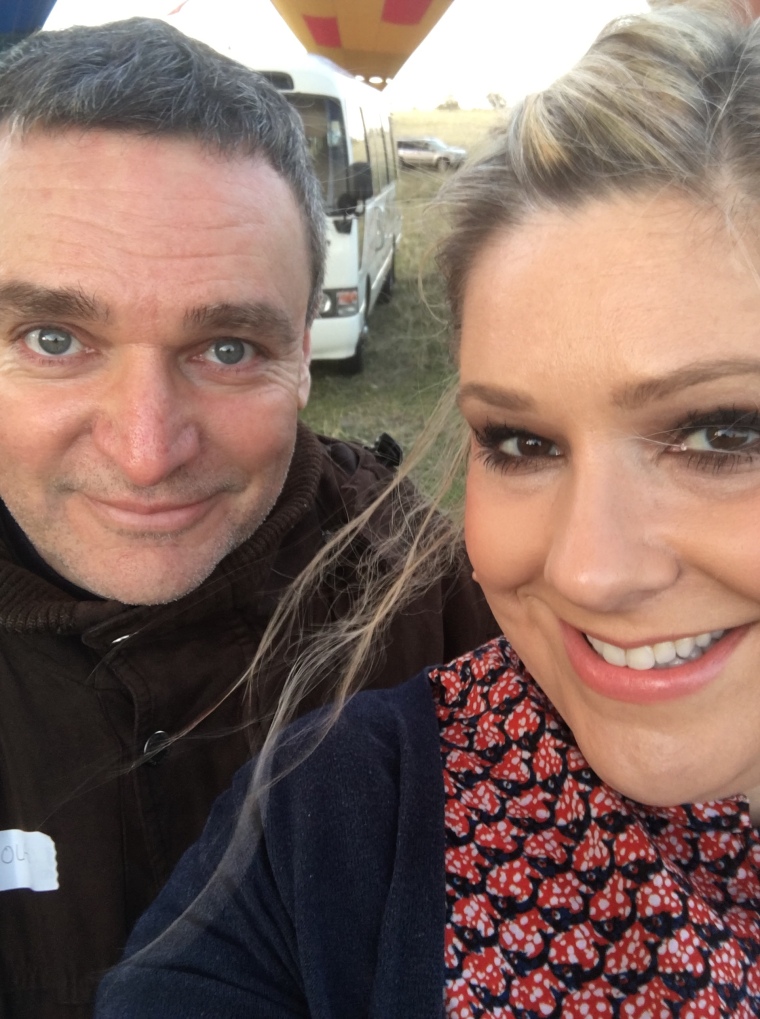 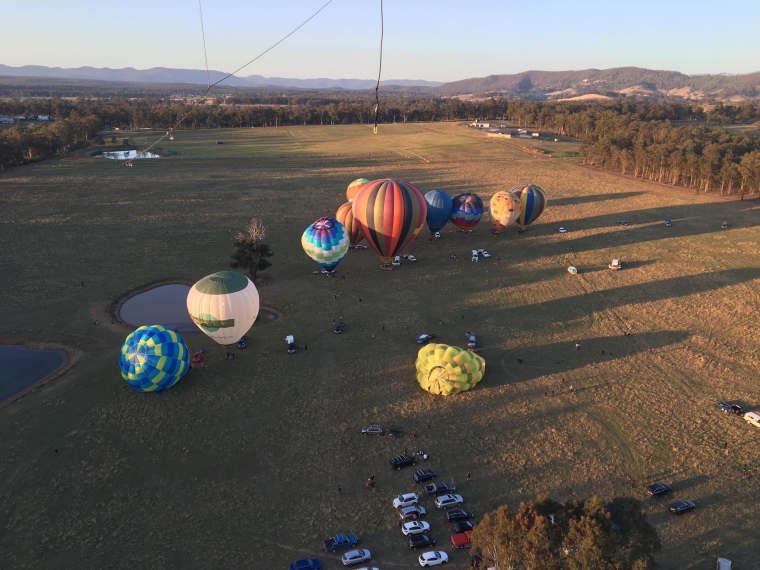 Looking back down from liftoff

Whereas my first experience lifting off in a hot air balloon felt like going up in an elevator, I would liken this ascent to an escalator – heading up at a 45 degree angle instead of vertically. Besides the pilot, we were the only passengers on our balloon that had ballooned before, and it was fun to watch the delighted gasps as everyone realized they were flying. Soon, we were catching up to the balloons that had left us in the dust.

Over farms and vineyards we flew, over dry gum trees and greening spring paddocks, over jacketed horses and lowing cattle, bouncing roos and fleeing bunnies. The country roads below were lined with parked cars and spectators taking pictures and waving.

Higher and higher we lifted, to 6,000 ft (1.1 miles)! Our pilot recently flew in a global hot air ballooning competition and won 9th place worldwide, so I felt like we were in good hands. Also, fun fact: hot air balloon pilots must also hold a commercial pilot’s license (and many fly commercial aircraft as their main job), so there’s that.

The air was cold, but not for me: in my typical fashion I was wearing a short-sleeved shirt with a light cardigan. Everyone else was wearing winter coats and hats. I was perfectly comfortable, but I have to admit that at 6,000 feet it felt a little too high for me. We floated there for about ten minutes.

I refrained from saying anything; two people on the balloon were very afraid of heights and one had almost backed out of flying at the last moment. So I kept pushing down an irrational thought that I could fall through the basket floor, and no one was the wiser.

The basket was divided into 4 quadrants with a separate section in the middle for the pilot and equipment. V and I were on the end of our compartment away from center, and I was right at the edge. Strangely enough, I looked straight down from the highest point and told myself everything was all right, and my fear subsided. I thought of my scary half hour drive home from the restaurant the preceding evening, where no streetlights, kangaroos my size grazing right at the edge of the narrow highway, and hairpin turns all had me holding my breath. That was *way* more unsafe than this, just less novel, my right brain announced.

All in all, we flew for about 45 minutes, traveling 16 miles total. It was beautiful, serene, the sky filled with colors.

We packed up our balloon, avoided a curious cow stampede, and headed back to the Peterson House for a champagne brunch (which would have been better had we not been at a cramped table in the sun, but the food and drink were good).

Our amazing pilot, Nicola – thanks Nic!

I took a million pictures and cannot post them all! Kudos to Balloon Aloft for another professional flight and unforgettable experience!

On Monday morning, after watching the distant 30-odd balloons fly across the valley from our AirBnB patio on the balloon fiesta’s fourth and final morning, we headed out to taste a few more wines before lunch and the long drive home. Heading down the mountain, we hadn’t been in the car three minutes, and we came upon this: 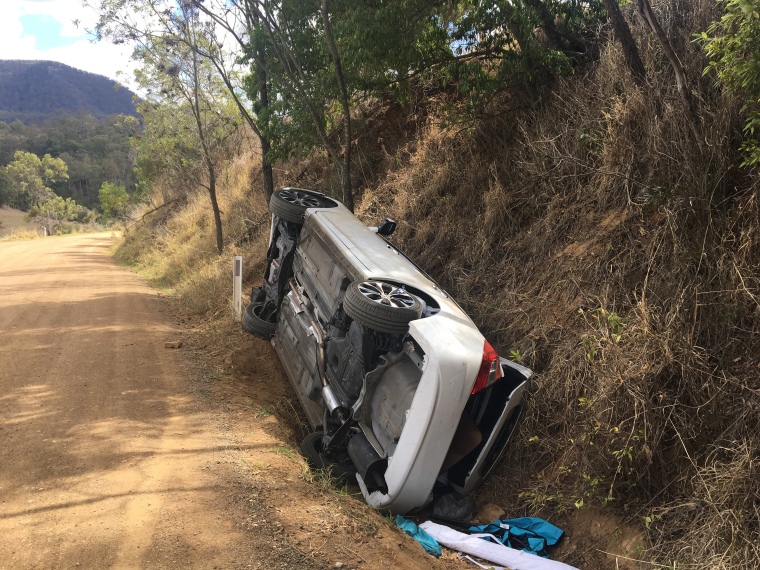 “That wasn’t there last night!” In disbelief, I pulled over, and the truck behind me did too. V and I ran to the car, and I scrambled uphill and peered through the windshield. Both airbags were deployed and the glass was cracked. No blood, I noted. I couldn’t see anyone. V took my place as I clambered up to the passenger side door and tried the handle. It didn’t open. I slapped the door repeatedly. “Hey!” I yelled.

The young couple from the truck approached cautiously. “This wasn’t here last night,” the guy said. “That’s what we were saying.” He climbed around the trunk, looking for a way to the driver’s side leaning against the hill in a ditch. Just as I was thinking to call triple-zero (Australian 911), I noticed a thin strip of white and blue checkered NSW police tape tied around the rear left wheel spikes. “It’s marked,” I said with relief. “The police have already been here.”

The couple in the truck left, and V went back to the car. Feeling like a voyeur, I took two pictures. I’ve concealed the license plate to protect the privacy of the driver, but I offer this as a warning and a reminder that serious accidents can happen in an instant.

We are all so accustomed to driving that we forget how dangerous it truly can be. When I saw the accident, it took me about three full seconds to grasp what I was looking at and realize I needed to stop.

V and I looked at the tire tracks from the downhill side and speculated about what happened. Drunk or speeding in the wee hours and couldn’t negotiate the turn? Sober as a judge but foiled by native wildlife, catching the driver’s side tires in the gully? We probably won’t find out, but we won’t forget it, either.

I drove most of the six hours home, with both hands on the wheel, feeling vigilant. Please, be careful out there folks. If you can afford to go out drinking, you can’t not afford an Uber.

Our fifth wedding anniversary was beautiful, filled with closeness between us, the great outdoors, sensational food and drink, and several new cases of wine and champagne carried safely home to enjoy during the rest of our tour. Not to mention I finally fulfilled my childhood dream of flying amongst a sky full of brightly colored balloons. Cheers! 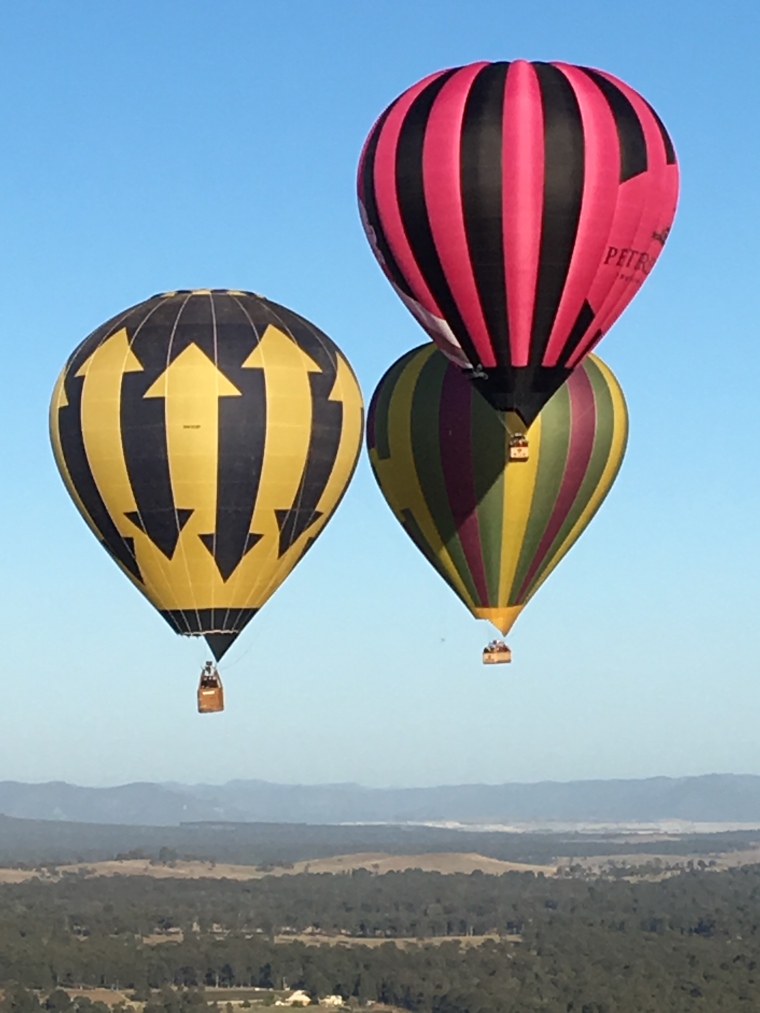 2 comments for “Up, Up, and Away: 5th Wedding Anniversary”