The weekend before Thanksgiving, I boarded a two-thirds empty flight out of Tashkent as the snow flurries began to fall. As the doors closed and everyone raced to the middle rows to lie down, I reseated myself in an empty and quiet emergency exit row. As is typical, the plane’s interior was overheated to the point where I felt ill. “It’s cold near the door,” a flight attendant chastised me in Russian. “Super,” I replied, also in Russian, “Because it is very hot in here for me.”

After a visit to an Uzbek dentist days before had resulted in a recommendation for extensive dental work, the medical unit at Post gave me the option of traveling to London for a second opinion and more care. However, given my propensity towards flip flops and the wretched state of my left foot, I opted for a more tropical winter destination. 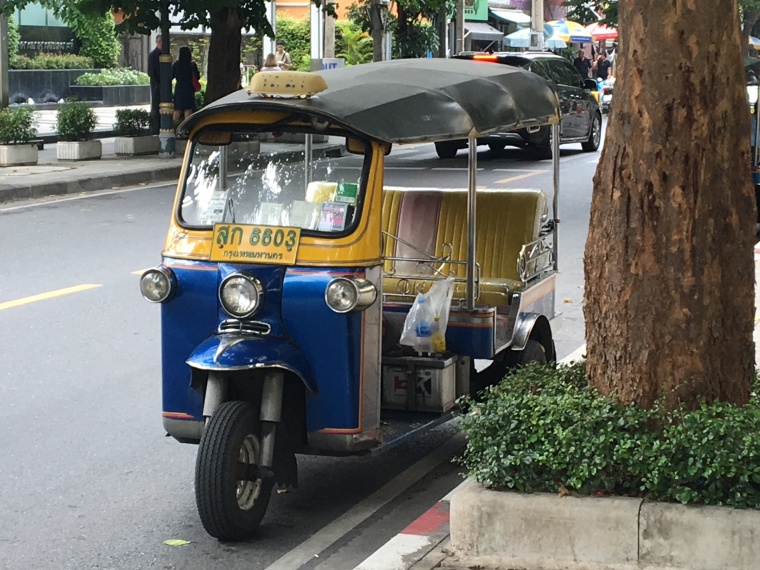 Freezing weather and rain vs. sunshine and temps in the 90s? Even the humidity couldn’t stop me. It wasn’t the way I planned to take my first trip to Thailand – I was planning a future trip to include a few weeks across Thai islands, plus Vietnam and Cambodia, and maybe even Burma or Indonesia – but my first trip to Bangkok happened that way all the same.

Bangkok vs. Other Places…pretty much what it came down to

I arrived on a hot and rainy night, and the first thing I did was order some shrimp pad Thai and chortle to myself about all the expanded Netflix options available in my new market.

Beautiful Sathorn Square, only a couple hundred feet from my hotel

Well, no, that’s not exactly what happened first. First I walked out of the airport towards the numbered taxis, all parked in a row, and saw a short queue in front of an automated machine that dispensed numbered tickets. I took a ticket, and it said #27.  I was about twenty cars too far down, so I made my way up the row until I arrived at car 27, just as a young backpacker couple threw their own bags in the trunk. They looked surreptitiously over their shoulders as they hurriedly crammed everything to fit, and off they went. I shouted out in protest to the driver, who peeked at me and then avoided my gaze. My time matters too, I thought in annoyance.

So I took a step sideways to car 26, and tried to negotiate a ride. The driver took my ticket, and a lot of walkie-talkie chatter and concerned head-shaking ensued. He pointed me back to the ticket machine. Ohhhhkaaaayyy, so it’s not cool to jack someone else’s car, and yet…?

So back I went, and this time got ticket #9. A shorter walk. I got to the ninth car and the driver took my second ticket and said in broken English, “Twenty-seven?” I thought I was hallucinating. “No,” I exclaimed, “Number nine!” More walkie-talkie chatter and head-shaking, and finally he gave up trying to negotiate with me in Thai, pulled out his phone, and typed, 900, as in, 900 baht.

Thanks to my A-100 colleague KD posted in Bangkok, I wasn’t negotiating blind, so I put on my shame-on-you aghast face and countered with 500. He said, “Toll road, toll road.” I held up my hands, like, “And?” This went on for long enough that I felt uncomfortable. I eventually agreed to 700 baht.  KD had said no more than 450 baht, but maybe I was trying to avoid a third trip through the ticket queue? People try to hustle me for a living, and I can more than hold my own in Tashkent. But in Bangkok, even though I’m opposed to paying more for no other reason than because I’m an American, there’s only so long that I can argue over…literally…a buck. (I made it up on the return trip from the hotel to the airport, when I shared a taxi with a woman from my hotel on her way home to Australia. We paid 200 baht each plus an extra 50 baht each we threw in as a tip, to a grateful smile from our taxi driver.)

I ended up staying in Bangkok for a little over five days, and although I only scratched the surface of Thai culture and sightseeing, I was happy all the same to have been there, and after visiting the chandelier-adorned BNH Hospital to fix what ended up being just one broken tooth, I was out on the town, drinking Starbucks, getting a pedicure, and figuring out the monorail.

Besides hanging out with KD – eating tacos, and seafood, and complaining about non-immigrant visa applicants as we strolled around Chatachak weekend market (two East SF Bay Area kids in Bangkok!), and admiring the cityscape at night from the Hotel Muse’s rooftop “speakeasy” bar – I also went to a mall that literally sold Rolls Royces and McLarens indoors. I had to laugh at the differences between the Thai and Uzbek markets.

I went on a five mile walk on the hottest day I’ve seen in months, and in a food court so robust it took me 40 minutes to see all the choices, I stumbled upon salt-rimmed margaritas and fish tacos that were so tasty I didn’t even notice if people were laughing at me – disheveled, eating alone in a semi-trance.

But the thing that made me feel like I really saw something Thai in Thailand was my visit to the Grand Palace. About five weeks before my trip, the revered King Bhumibol Adulyadej passed away after over 55 years on the throne. The country had entered a year-long period of mourning. I read in the news that the king’s ashes were at the Grand Palace for people to visit and that thousands of mourners were presenting themselves. So I donned a black floor-length dress, grabbed a jean jacket and scarf to cover my shoulders and arms, pinned on one of the black ribbons that were being passed out everywhere, and went to pay my respects.

I walked to the nearest monorail station down the street, rode two stops, walked to the pier, and stood in a huge crowd trying to figure out the ferry schedule. Together with a young Italian couple, we finally managed to point ourselves towards the correct line. The thirty minute wait didn’t seem so bad because I instantly realized that people were queuing in a respectful and orderly manner. I popped a Dramamine. Finally our boat came and I zoomed to the front to sit in the open air. An American tourist sat next to me and we did that thing Americans do abroad: looking at the other person out of the corner of your eye while trying to figure out if they are an American. At some point he twisted around and spoke to his wife, which confirmed that he was. I sat in perfect silence and said not a word as the breeze blew though my damp hair.

The ferry glided and bounced about thirteen or so stops down the river coast, until we reached our stop. I wandered around in the throngs of mourners for nearly forty-five minutes until I found the entrance, was given an approving nod by the attire control monitors, and sold a ticket.

I cannot express how hot and humid it was that day. With every inch of my skin below the neck covered, save my hands, I was sweating to the point where I thought at one point that I would faint. To try and comply with the strict dress code rules I’d found online, I had even worn wraparound sandals purchased during my recent trip to India that covered the back of my feet. However, I’d never worn them for any sustained period of walking, other than just to and fro inside the embassy, and I was dismayed to see how much they cut between my first and second toes.

I wandered around for another ninety minutes or so, dumbfounded and marveling at the exquisite beauty of the palace. I saw a line of several hundred women waiting to see the king’s urn, and finally they all sat, reverent, silent, not close but not leaving. 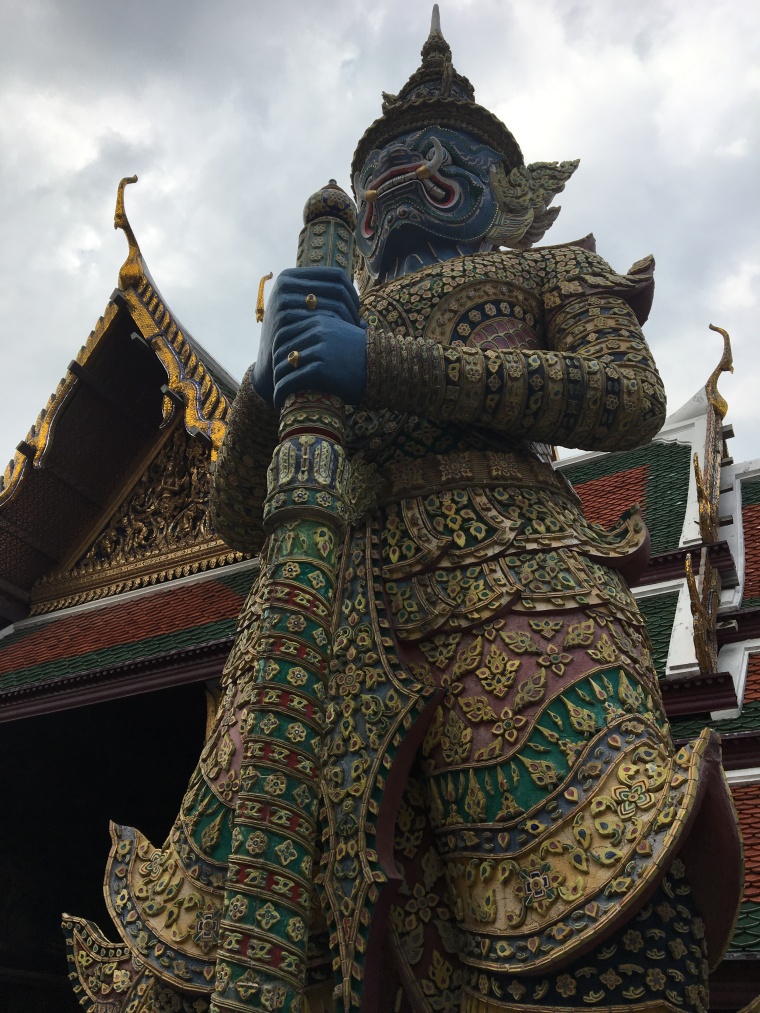 I circled around and around, limping more and more, and losing speed. At the point I wanted to leave, I realized I was somehow trapped in a loop. After thirty more minutes unable to exit the compound and being redirected one way and then another, I finally approached a policeman and tearfully pointed at my openly bleeding feet. Seeing my confusion and heat exhaustion, he walked with me, pointing me in the right direction. 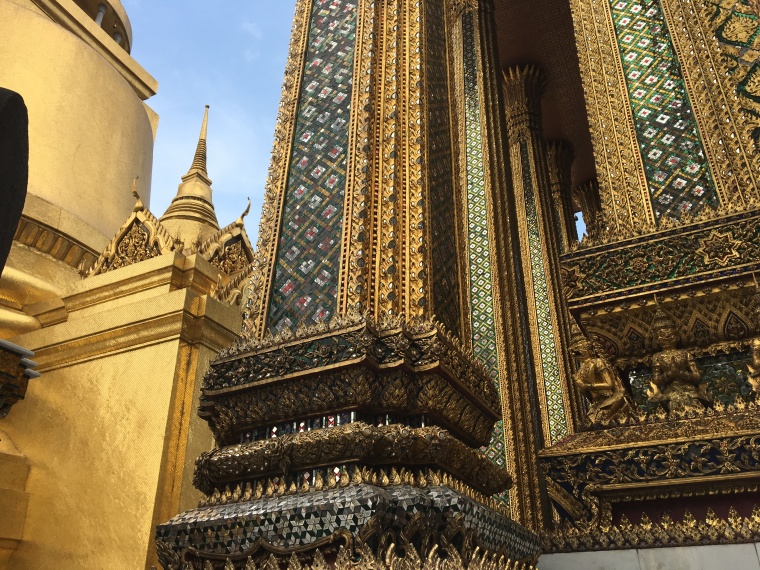 I got outside the compound, gratefully ripped off my jacket and scarf, shopped briefly for elephant print skirts that had been eluding me across two continents (you know, priorities), and then hailed the first cab I saw. When I considered that the one-way ferry ticket had set me back about twenty-eight cents,  I paid the equivalent of ten dollars and took an air-conditioned taxi ride directly back to my hotel. A fabulous salad, Italian soda, and fresh asparagus awaited me down the street from my hotel at Dean & DeLuca, where I bought imported coffee and sweets afterwards to bring to Tashkent as gifts.

I arrived back in Tashkent in the wee hours of Thanksgiving morning, wearing my new elephant print skirt and flip flops as the ground was covered with snow. Women arriving into the airport from St. Petersburg and Moscow looked at me with concern. They exclaimed in Russian, “Aren’t you cold? It’s cold here,” and I smiled, calling back, “I love winter,” as I strolled to the diplomatic vehicle with my expediter. I think I could still feel a little of that scorching Bangkok sun on my skin. I collapsed into bed, and awoke later that afternoon to attend a diplomatic gathering that included turkey, stuffing, and cranberry sauce, and most importantly, good company. For just a few days, the world was (almost) my oyster.

2 comments for “The World’s Your Oyster”