In early August, V and I spent the first part of our home leave in Hawaii. Home leave is Congressionally-mandated vacation in the U.S. or its territories (you can cost-construct against your Home of Record) after an overseas diplomatic posting. Home leave is designed to help you reacquaint yourself with the country you are serving. It starts the first business day after your travel day (the day you land in the U.S.), and should last a minimum of 20 business days before your onward training or posting starts. I had counted backwards from the first day of Spanish class this coming September to determine which day we should depart Australia and make sure we took at least the minimum home leave.

Although home leave is required, it isn’t paid for; officers and their families have to juggle expenses and decide whether to visit family, go to a new place, or some combination. Going on vacation in a first-world country for a month, usually with no car or house, can be really expensive! Compared to our first home leave in 2017, this time I prepared better and saved up. Since Honolulu falls roughly 2/3 of the way between Australia and California, and neither of us had ever been to Hawaii before, it seemed like a terrific stopover point to kick off our home leave. Honolulu and the island of Oahu did not disappoint! In case you are curious or planning a visit, here are the things we enjoyed most – in no particular order – during our five nights and six days there.

The Byodo-In Temple in Kaneohe’s Valley of the Temples Memorial Park is a replica of the original temple, built in Japan about 950 years ago and considered a Japanese national treasure. It only cost $5 to enter the grounds, and the misty mountains in the distance created an eerily peaceful and beautiful scene. 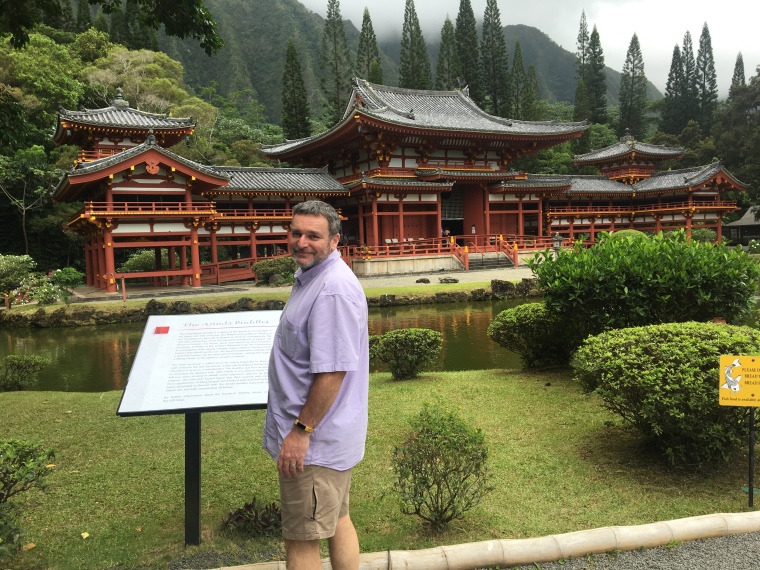 We watched the koi and black swans, visited the meditation pavilion, and paid our respects at the temple. 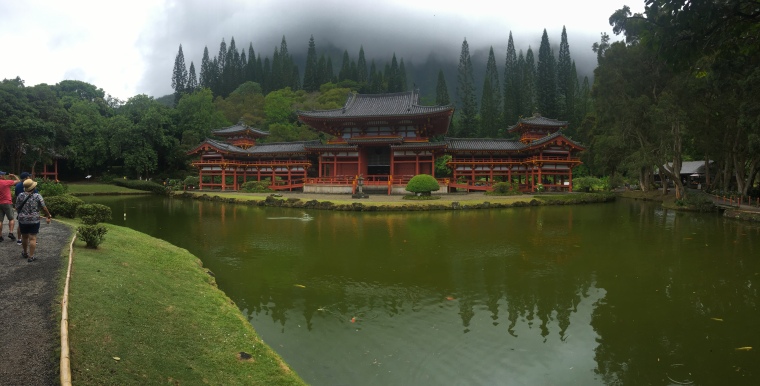 There is no question that after more than two years outside the U.S., I was pretty excited about reacquainting myself with American food. It’s not like I was deprived of wonderful food in Australia, by any means! But some things are just not the same. In Hawaii, between Mexican restaurants, a Hawaiian luau, the Hard Rock Cafe Honolulu, and the grocery store, I ate my share of Americana. And my goodness, the portion sizes compared to Australia!! So huge. 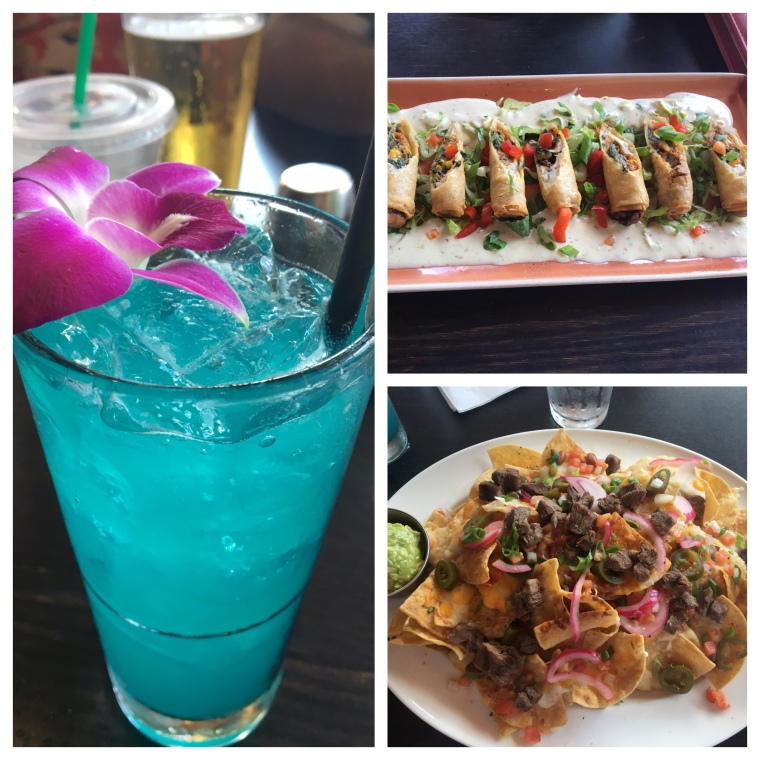 Even though the weather on the day we went to Pearl Harbor felt like a cross between the jungles of southeast Asia and the surface of the sun, parking was limited, and the USS Arizona tour I’d held tickets to for several weeks was temporarily closed, it was still worth doing. 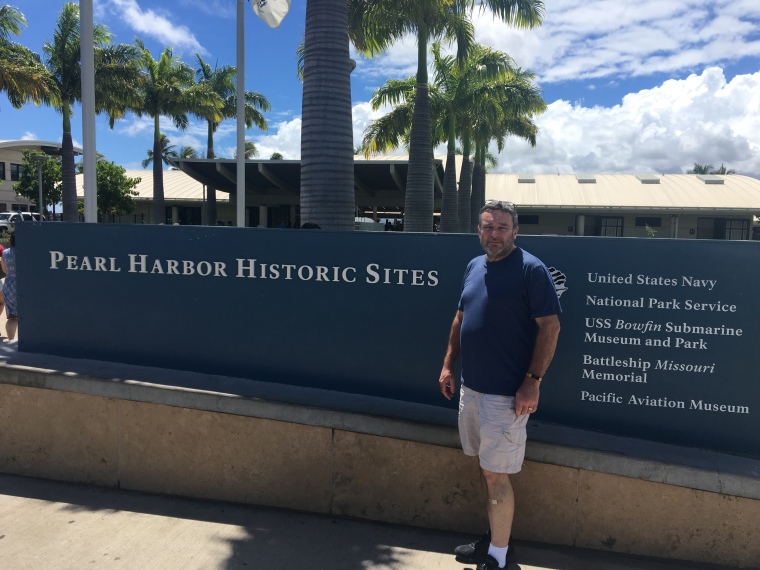 It was a little hard to reconcile the horror of that day with the peaceful (yet busy) environment Pearl Harbor is now, but I think it’s important to try. It was especially interesting after our recent trip to Australia’s Northern Territory, where we learned about the Japanese attack on Darwin that took place just two months after Pearl Harbor.

Probably the most adventurous thing we did was go ziplining for the first time. We drove halfway across the island for the chance to zipline at Keana Farms, a working farm with eight dual ziplines ranging from 500 feet to half a mile long.

V is not a huge fan of heights, so I was proud that he volunteered to go first. 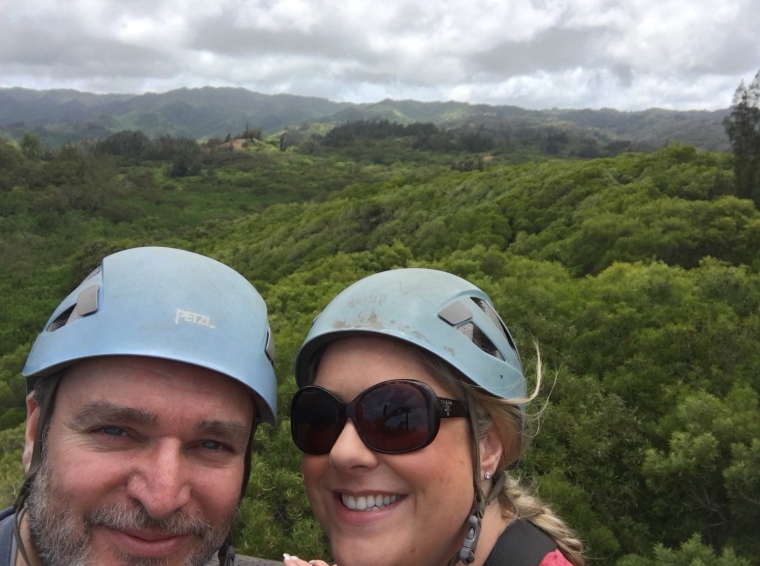 After an off-road vehicle trip to the furthest-away line, high above the jungles we tested our strength and our nerves, especially when I traveled backwards at warp speed and couldn’t get myself turned around. I came into the platform area so hot I was practically in flames! Fortunately the guy waiting to grab me on the other side was a very large individual, because the collision would have been spectacular if not. 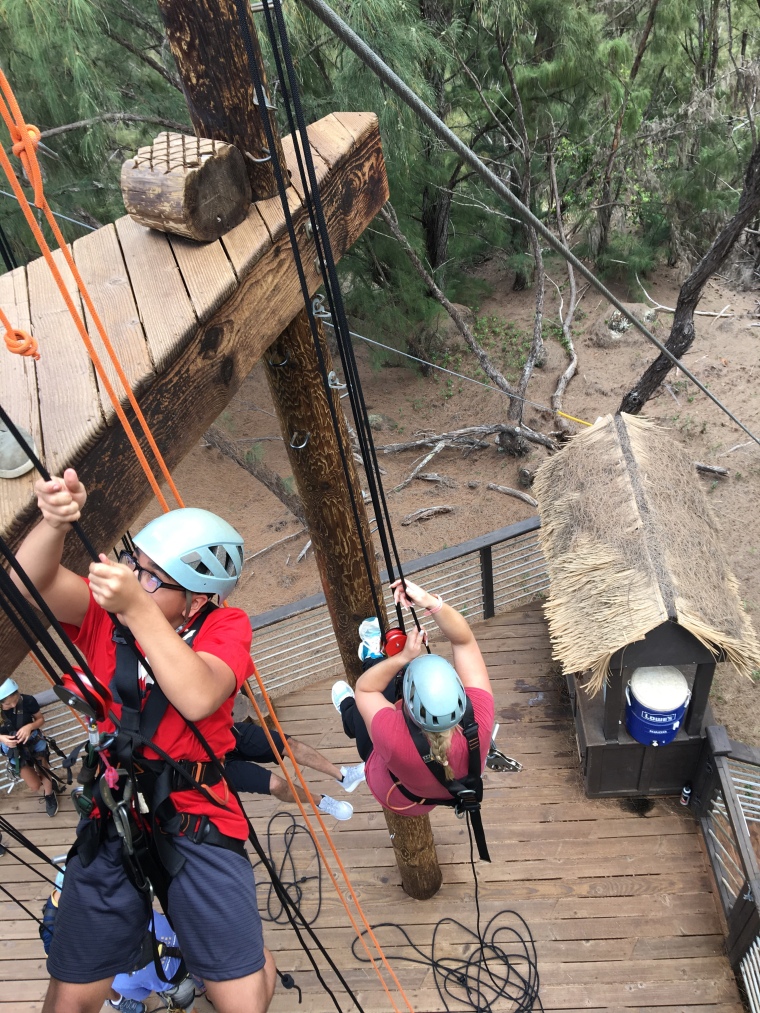 We had to ascend to one of our platforms – surprise!

I highly recommend visiting here if you come to Oahu. It has a terrific vibe. They taught us the Hawaiian philosophy “Malama ka aina malama ka aina kakou.” Translation: “Take care of the land and the land will take care of you.”

It’s part of the traditional land strategy of native Hawaiian people that the farm still exemplifies today by growing and selling local food.

We also took a tour of Iolani Palace in downtown Honolulu to learn a little bit about Hawaii’s history of kings and queens before its monarchy was overthrown in the 1890s. 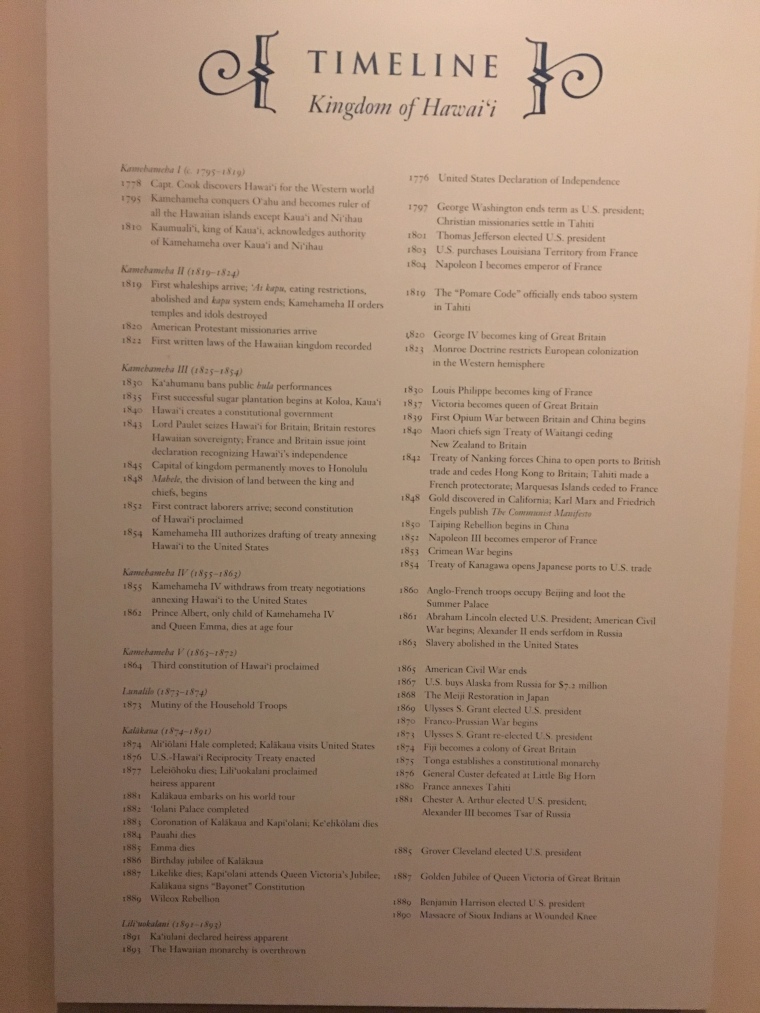 Hawaii became a U.S. state in 1959; later this month, Hawaii will celebrate 60 years of statehood. Iolani Palace is the *only* official royal residence in the United States.

I have to admit I really didn’t know much about Hawaii’s former monarchy, and I was glad our tour guide was Hawaiian and could share this unique historical perspective with us. 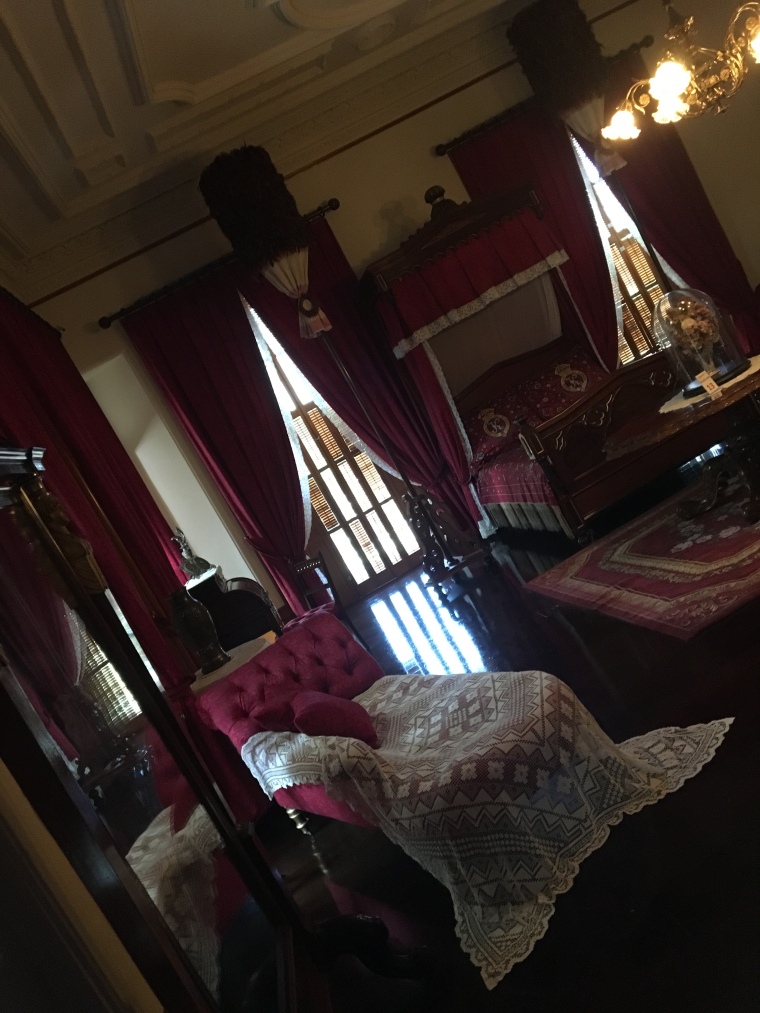 It’s good to be queen…

I was also surprised to hear that of the 10,000 items thought to have been in the original palace, only about 6,000 have been returned; when the palace became an administrative government building, U.S. officials had auctioned off or gotten rid of most of the royal family’s household effects and belongings. Now the museum is searching for those items to make the restoration of the palace more complete and historically accurate.

I just can’t say enough about our AirBnB, and our oceanfront front yard.

It literally took less than 30 seconds to get from our kitchen to the beach. The sunrise and sunsets were spectacular. I think I only missed one; starting and ending each day with a swim was so good for my spirit. 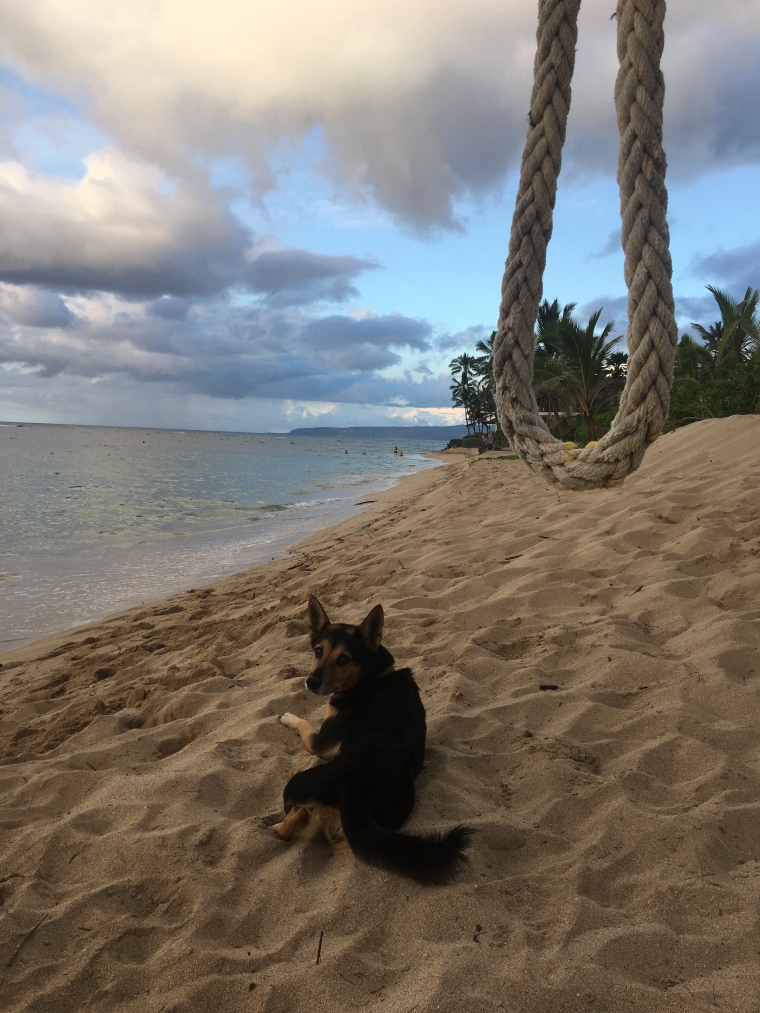 I already posted a couple of pictures of our AirBnB in my previous post, and I would definitely stay there again.

We also spent several hours one day at the PCC, one of Hawaii’s top tourist experiences highlighting Pacific culture (Samoa, Tahiti, Hawaii, Fiji, and others). The PCC has two full days’ worth of performances, food, demonstrations, a marketplace, canoe rides, village tours, and an evening show. I booked a package tour and we ended up with our own guide all to ourselves! 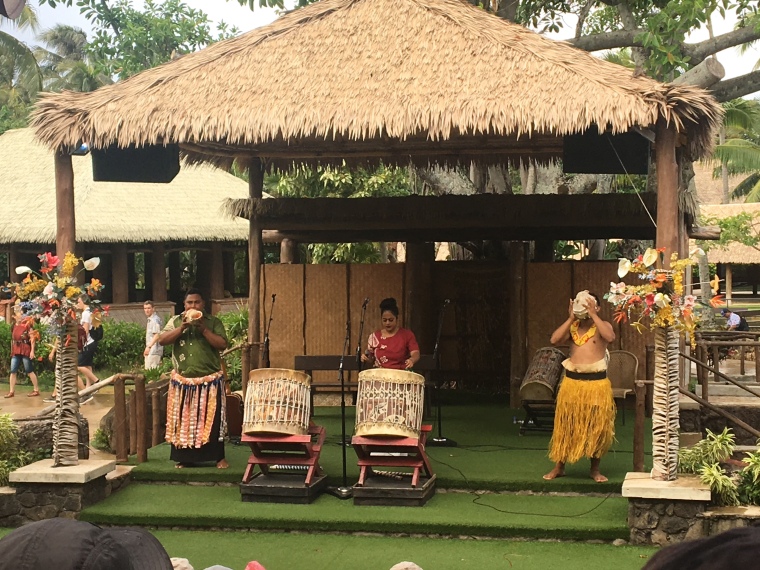 There we also attended an authentic (and our first) luau. Although it was a hot, humid day, the PCC was not cheap, and took about 45 minutes each way for us to get there, I am really glad we went. The fire twirling and juggling that went on for literally 25 minutes during the evening show alone was a lot of enjoyment. Such a shame that pictures were prohibited, but I did respect the request.

Hawaii was incredible! If you have a chance to do a rest stop there, I recommend it. Even though dealing with our luggage two extra times was temporarily tedious – the reason I normally avoid rest stops – it was worth it for us in the end!

During the remainder of our home leave (we are not quite to the halfway point yet), we are visiting California, Oregon, and Washington on a journey from the west into the Pacific northwest. We have a great mix of family and alone time, sightseeing, new activities, sports, and relaxation planned.

3 am thoughts and musings

Welcome to the Other Side