Part of the reason I wanted to ride the Ghan train across Australia was to make a stop at Uluṟu (oo-luh-ROO) – the infamous red sandstone rock in the middle of the Australian Outback. Formerly known as Ayers Rock, to call it a “rock” is a bit of a misnomer; at just over half a billion years old and 348 meters or 1,142 feet tall, Uluṟu is visible from space. If you’ve ever seen a postcard or image of Australia, chances are it featured Uluṟu. I visited it previously in 2006 when my dad and stepmom came to visit, and it was one of the highlights of my euphoric grad school year in Australia.

Part of our touring package was a round-trip bus journey from Alice Springs for an overnight at Uluṟu, about 450 km (280 miles) each way, along with multiple activities and accommodation in the premier hotel on the resort grounds, Sails in the Desert. In retrospect, I wish I had questioned the distance a little more and arranged to stay at Uluṟu longer, but in order to reboard the Ghan in Alice Springs, we needed to either stay a night or wait until the following week to catch it north. And thus, a Hail Mary trip to Uluṟu it was.

[This post is part three in a five-part series about our Ghan voyage across Australia. You can find the links to part one and part two here.]

We awoke in Alice Springs and were ready early on day six of our big trip to travel to Uluṟu. V was a little dismayed about being on a bus for seven hours two days in a row, and honestly, I didn’t blame him.

[Note: If you are traveling on the Ghan and have an Uluṟu option, consider flying from Alice Springs to Uluṟu separately and staying for at least three nights; longer if you can swing it. The resort has accommodation available at a variety of price points. I kind of wish we had done this rather than take a bus the whole way, but our time off was limited. Self-drive is also an option; although renting a Ute and a sat phone to navigate across hundreds of miles of desolate territory on the Stuart and Lasseters Highways may have been more responsibility than I wanted.]

The time on the bus was a little boring, but each seat had phone chargers, and there was lots of beautiful bush and desert to stare at through the large windows, along with the occasional cattle station or homestead.

Plus, our bus had a toilet, and made a few relief stops at Outback roadhouses – usually featuring a gas station, mini mart, camping and trailer hook-ups, a tavern, and sometimes an aviary, emu, or camels. None of this did I really mind, so compelled was I to make a return pilgrimage to Uluṟu and share it with V.

Baby camel at a gas station along the Stuart Hwy, NT

Our guide’s insights and my own research into the history of Uluṟu, the surrounding area, and evolutions in how the land has been managed I found interesting. When white European settlers arrived in the 1870s and presumed to call Uluṟu “Ayers Rock” and Kata Tjuṯa “The Olgas,” they would have likely been surprised to find out that Aboriginal people had already been living in the area for somewhere between 22,000 and 35,000 years and had their own names for these sacred places.

Our guide told us that scientists say the area sand dunes haven’t even moved for 30,000 years.

Uluṟu is very sacred to the traditional land owners, the local Aṉangu people. For many thousands of years, they have used its sites for sacred ceremonies and they have a lot of stories about the different features of the rock and what they mean. There are also certain places at the rock that are disrespectful to photograph, so I had almost forgotten what they looked like (since I never captured them) and was happy to see them again in person.

Competition between Aboriginal people and white settlers became problematic in the early part of the 20th century, during which time the government identified the area as the Southwestern/Petermann Reserve. Arrival of Piranpa (the local word for white people) caused a lot of disruptions to a lifestyle and traditions that had evolved over thousands of generations without interruption or outside influences. Essentially, the traditional owners of the land were dispossessed of their sacred places, in a way that I could only imagine must have been incredibly painful.

In the 1920s, the government set aside a parcel of land as an Aboriginal Reserve, and formerly established the Ayers Rock-Mount Olga National Park in the late 1950s. In 1967, when the question of whether Aboriginal people should be considered citizens, 90% of Australians sent a resounding “yes” vote to Parliament.

At some stage, perhaps in the late 1970s, the name had been formally changed to Uluṟu–Kata Tjuṯa National Park, although the resort itself is still referred to as the Ayers Rock Resort.

In 1985, after years of advocacy from Aboriginal Land Rights Commission and other stakeholders expressing concerns about impacts on the land from mining, pastoralism, and tourism, the Australian government in a historic move handed back *all* of the surrounding land to the traditional Aboriginal owners. They agreed to lease it back to Parks Australia on a 99-year lease under a joint management plan.

That agreement was a condition of the handback and had taken years to reach, although other lands had previously been returned to traditional ownership under the 1976 Aboriginal Land Rights Act of the Northern Territory.

My first trip 13 years ago to Uluṟu, yes, rocking a pewter handbag with outdoor clothes, June 2006

Many local Aboriginal people work as park rangers and caretakers, something we learned about at their cultural center within the park, at which no photographs were permitted. I highly recommend a visit here to understand why the park sites are so sacred to Aboriginal beliefs.

I have only been here twice, but there is something very peaceful and awe-inspiring about it. I was surprised to see that photos of cave art I had taken 13 years apart had changed little. I was a little dismayed to learn while we were there that the resort capacity of 5,000 people had nearly been reached; winter is peak tourism season due to the unbearable heat and flies of summer.

I was also disappointed that people are still climbing the rock, something that was agreed to cease decades ago. Scientists estimate the scar caused by 50 years of climbing will take the rock between 100 and 500 years to self-repair. Apparently in October 2019, this dangerous and disrespectful practice will stop for good and violators will incur an A$10,000 (USD $6,980) fine. More than three dozen people have died doing this over the years with many more injured. As I watched people pull themselves along up the support structure, more than a thousand feet with no safety equipment, some wearing flip flops and accompanied by small children, I wondered how they weren’t ashamed, especially with this sign from Aboriginal elders right at the bottom: 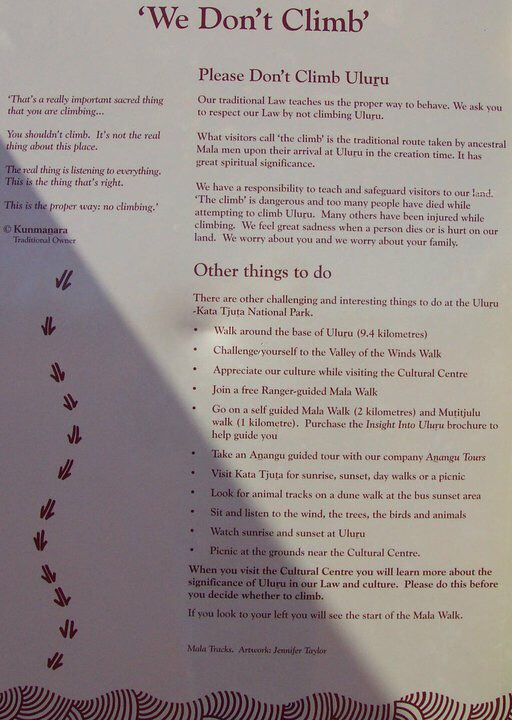 Overall, although I love this place, I was unimpressed with the unnecessary rush by the tour guides, crowds at sunset and sunrise and a new feeling of over-commercialization, and disorganization of hotel staff. Upon arriving, we had less than 50 minutes to check in and find something to eat before leaving on an excursion. The only reason it worked is because V stayed at the bus to see the baggage unloaded while I charged straight to the overwhelmed and harried reception counter.

And I was dumbfounded (but somehow also *not*, having lived here for three cumulative years) that not a single cafe or eatery in our complex was licensed for takeaway, so after seven hours on a bus and barely having time to set our bags down in our courtesy-upgraded suite of rooms or use the bathroom, we were back on the bus for another tour having had nothing to eat. We grumbled with the other Americans on the bus who felt our pain at Australians’ general customer service setup that doesn’t really take into account the customer or environment! It isn’t as if hundreds of tourists don’t arrive and head out on tours without having time for a full sit-down meal on a daily basis…? 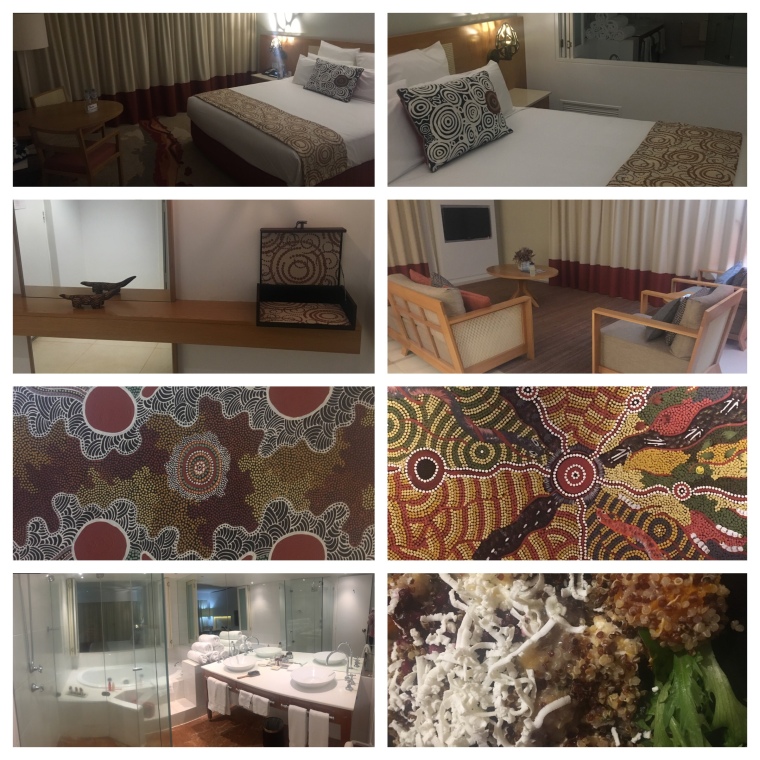 My one regret: not staying here longer to properly relax!

But we soon forgot about it having an opportunity to buy a sandwich from a shop benefiting the Aboriginal community as we enjoyed our tour. If I were to ever visit here in the future, I would fly, and I would stay at least a few nights like last time. Because we were out until after dark and departed before 06:00 the next morning to catch a sunrise tour of Uluṟu before heading on to Kata Tjuṯa, I literally never even saw the daytime view from our balcony. Ugh.

In any case, on day seven we were off to view Kata Tjuṯa’s 36 mystical domes and to hike the Walpa Gorge. 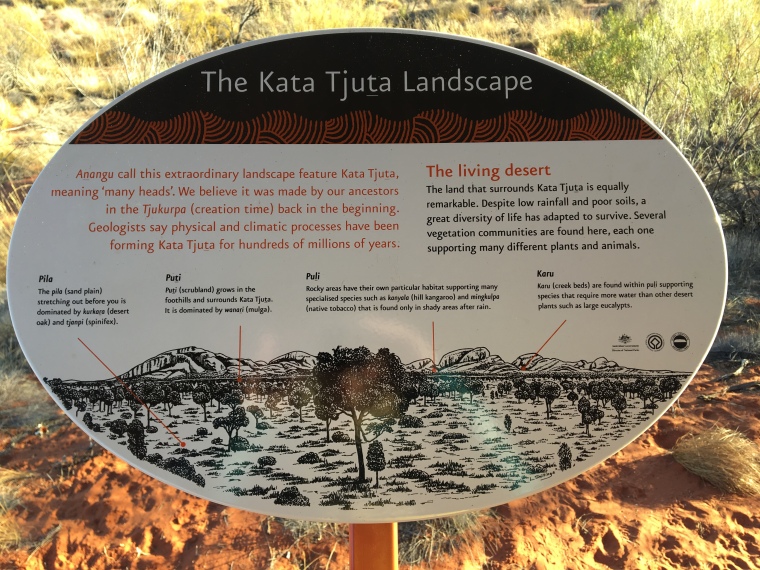 Kata Tjuṯa, sometimes still called the Olgas, means “many heads” and Walpa means something like “Valley of the Winds.” The domes date back about 600 million years with red hues attributable to iron.

The landscape of the Walpa Gorge took my breath away. Partly due to its beauty, and partly because I had to huff and puff and watch each step on the way up!

As we bussed our way back towards Alice Springs across the dry desert landscape, passing places with names like “Erldunda” and watching the sun set over endless red boulders and dry gum trees, I couldn’t help but feel a sense of gratitude that we’d made it out to Uluṟu and Kata Tjuṯa. It was well-worth a look!

The following day, we were to explore Alice Springs and then re-board the train to head up to Katherine and beyond, Darwin.

2 comments for “The Ghan, Part III: Uluṟu and Kata Tjuṯa”