It took us about eight weeks from the time we arrived in Canberra to really get out on the weekends and start to explore the city. Sure, we’d spent precious weekend hours running what few errands one can during non-business hours here: Setting up banking, assessing the offerings of Australian Costco, and even having blood drawn. Lots of things are slowing our jump from survival mode to enjoyment mode. My husband looking for work. Car trouble, repeatedly. And of course there was my six week hospitalization, my full-time job, and having everything we own on a cargo ship somewhere. At a certain point, we decided not to let anything stop us from having some fun – not the freezing cold weather, not the 24 inch chest catheter tube coming out of my upper arm, and not the fact that our lives are in boxes and we don’t know where our socks or cheese grater are. In October, as spring began to warm the Southern Hemisphere, we’ve been out and about in Canberra.

A couple of days after our fourth wedding anniversary, we attended Canberra’s 30th annual Floriade Night Fest. I bought those tickets a few weeks in advance as a kind of an apology to my husband; my boss had requested my presence at an evening diplomatic reception on our actual wedding anniversary and I was one of the guests of honor, so what are you gonna do? But part of it too was that Night Fest looked cool, and I wanted something special for us to look forward to as winter thawed. I bought tickets as close to the end of the monthlong event as I could, hoping it would warm up. Between my illness, antibiotic-induced drowsiness, and impaired mobility, I definitely haven’t been the most exciting travel partner lately.

Floriade is a Canberra tradition that was established in 1988 to mark the city’s 75th anniversary. The celebration welcomes spring each year with more than one million flowers planted across several thousand square meters of city parkland along the shores of Lake Burley Griffin. When night falls, Floriade closes for an hour, and then reopens as Night Fest, featuring massive light installations, special comedy and musical performances, local vendors, art, food trucks, wine tastings, carnival rides, and of course, hundreds and hundreds of thousands of flowers illuminated beautifully by an array of colored lights. 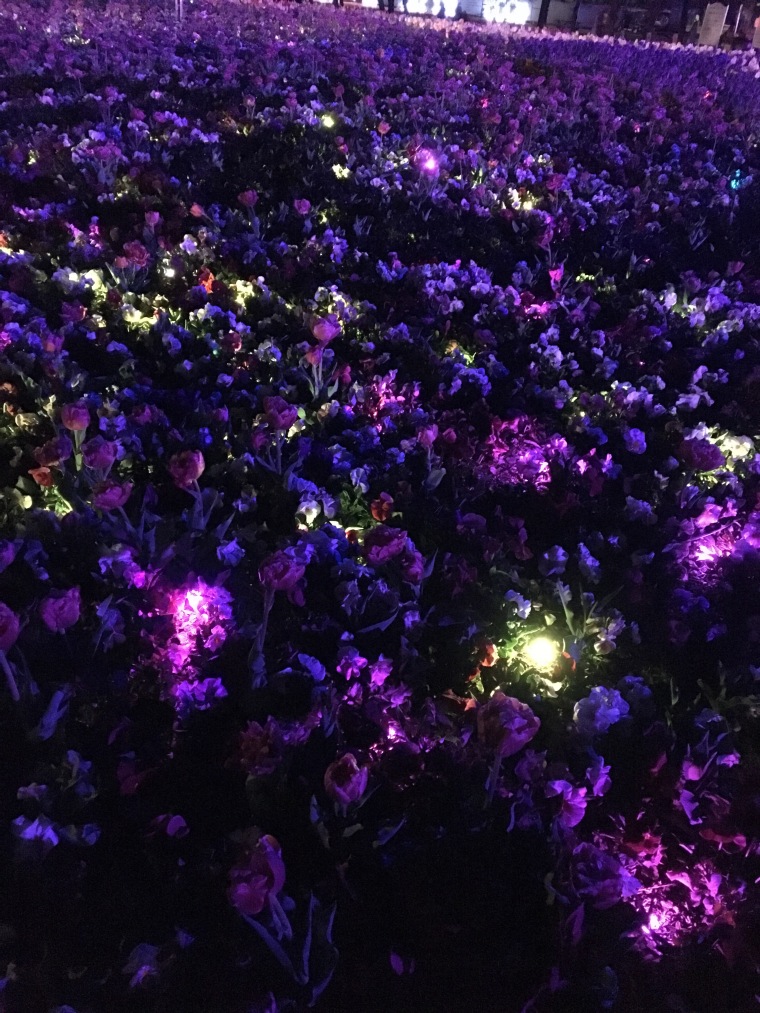 When the evening came, we got dressed up and took an Uber downtown to avoid any parking fiasco. Luckily, pretty much everywhere in Canberra is 15 minutes away from wherever you are, and this was no exception. I fed my IV tube, taped at multiple anchor points along my arm, through the front of my dress and coat rather than curtail its slack by routing it down my arm (the other end connected to a bottle worn around my waist), and wore my fanny pack on the outside of my coat with no shame. I limped into this charming environment with my prosthetic boot on and felt pure delight.

I decided not to lug along my Nikon, so I didn’t get the best photos, but you can Google “Floriade Night Fest” and get an idea of the scope and beauty of this event. Ambling down paths wound along the water with my sweetheart in the cold night air, enjoying the scents of fresh flowers and delicious food, and coming upon surprises like a multicolored ferris wheel, and men in costumes lowering large illuminated metal insects on poles down to say hello, made for a whimsical and well-needed evening with the people.

I would definitely go back to Floriade next year, perhaps during the day just to see the flowers in daylight. From what I understand, this used to be a small event, but it seems certainly to have grown in size and attractiveness. It’s really a lovely event for visitors of all ages. And I just found out as Floriade drew to a close this week that many of the flowers will be distributed to hospitals and aged care and hospice facilities around Canberra for the enjoyment of those who couldn’t make it to the park. The community feeling here in Canberra is just one more thing on a long list of things that the Australians do so well.

The following weekend, we were invited by three embassy friends to join them in attending the annual Murrumbateman Moving Feast. Murrumbateman, a region north of the Australian Capital Territory in New South Wales, is home to more than a dozen local wineries and boutique makers of specialty foods who open their doors all weekend long for a special feast.

My initial response was to decline the invite. I needed to rest, needed to save money, couldn’t drink anyway because of the antibiotics, and so on and so forth. But that week had been kind of the week of “yes” for me. Case in point: I’m strolling up to the the embassy first thing in the morning and I see one of my colleagues already headed out and he says, “Penny, will you do this demarche with me?” I about-face to join him. “Let’s do it. Where’s your taxi?” Or “Penny, can you be control officer for these three visits? Solve this consular problem? Find this political contact? Volunteer for this other thing?” “Well yes, yes I can.”  So as my inner introvert winced, I said yes to this feast too, and I ended up feeling so glad we went.

During this year’s feast, eighteen wineries participated. Participants show up to the locations where they’d like to sample the drinks and food; cost for savory dishes was $25 AUD and $20 AUD for sweet, with a drink included. You try what you’d like, and then move on to the next location. In addition, each winery gifts you the genuine Reidel stemware in which your wine was served – very cool.

We took an event map that one of our colleagues made highlighting the six wineries she thought had the best pairings and we made it a priority to visit those. Then I entered logistics officer mode by designing the most efficient route to get to each location with zero backtracking. I’ll give a description of the above photo clockwise from left to right, eaten over an eight hour period.

The first stop was at Gallagher Wines, where we enjoyed Belgian waffles with hand-crafted maple ice cream, topped with spring berries and chocolate ganache. The wine was a sparkling duet. To get to the next location, our two-car caravan took a shortcut that led us down about thirty minutes of unpaved country road to Long Rail Gully Wines. There we enjoyed a surprisingly large portion of beef fillet marinated for 24 hours in Shiraz and then smoked and slow cooked with roasted chat potatoes. The Shiraz we tried there I think was everyone’s favorite of the day.

Next we went to the Vintner’s Daughter and had some pretty legit Korean bao sliders with BBQ pork, gochujang mayo, kimchi and onions, paired with a Pinot Noir. We only wished there had been more of it! At McKellar Ridge Wines we had more beef with mushrooms and salad, paired with the winery’s 2013 “trio” blend of Cabernet Sauvignon, Merlot, and Cabernet Franc. This was the first vineyard where we weren’t asked to pay in advance, and as we were loading up into our cars, I suddenly asked, “Hey, who paid?” Everyone looked at each other, eyes widening in alarm. “We didn’t pay?” Then we started laughing in hushed horror that five diplomats almost pulled an inadvertent dine ‘n’ dash on this upscale establishment. As one of two designated drivers, I ran in to rectify the situation; I was a sympathetic character standing there with a tube snaking down my arm into a bag around my waist. The proprietor said that they’d forgotten to charge us, thanked me for coming back, and proceeded to give me a 25 percent discount, to the great bemusement of the room.

Four Winds Vineyard is a regular with our friends for what is apparently God’s gift to pizza. This time we went there for their cheesecake and special Rosé. I admit that when I think of Rosé, I think of Franzia boxed wine. I don’t know if they even still make it, but I remember seeing it in the 1990s and people saying it was tacky. Whether or not Rosé has made a comeback, this particular Rosé was a knockout. And the cheesecake nearly evoked tears.

Our final stop was at Barton Estate Wines, and simply because it was on the road back south. To our disappointment, they had nearly run out of lemon cake, but managed to scare up a few plates of it which we shared and drank with a late-picked Riesling. The vineyard had completely run out of their more enticing option, French rum and vanilla cake. But when we heard that the winery owners’ Dalmatian, called Marty, had recently been to the pet hospital after sneaking in and eating some of the compost pile, and that the owner had then burned the cakes in her distress over her dog’s health, we totally understood. (Marty is OK!)

Even when your PCS move seems interminable, it’s important to spend a little time enjoying good company and spending some leisure time getting to know and understand the natural bounty and beauty of a place. We’re going to get exploring Canberra more often.

← Where the Rubber Meets the Road
Come Sail Aboard S.S. Nepenthe →

6 comments for “Out and About in CBR”