Next month will make two years that I’ve lived in Uzbekistan. In the course of my work here on immigrant and “green card lottery” cases, I’ve looked at literally hundreds of Uzbek wedding photos, submitted to bolster the bona fides of a relationship. I’ve seen the dresses, the festive and colorful tables, and the giant plates of plov. But literally every Uzbek I know is already married. In fact, my Uzbek colleagues who are the same age as I am have children who are now preparing for university. That is probably why I’ve never actually received an invitation to an Uzbek wedding. But a couple of weeks ago, one of my colleagues A., walked into my office and asked me what I was doing on April 14.

Assalomu alaikum, and come to our wedding!

A. told me that her brother was getting married, and that since the groom’s family gets to choose 75% of the guest list, her parents were excited to let their daughters invite their own friends and colleagues.

My husband and I were finally going to an Uzbek wedding! I was excited. I cancelled our plans to go out of town. I was thinking – what to wear? What kind of gift to bring? A bright dress with sequins and dollars as the universal language of congratulations were the obvious choices. And the wedding was even going to be held in a building that I have been curious about for a long time:

On the afternoon of the wedding, my back was hurting to the point where I didn’t want to get out of bed. I overslept from a quick nap. My hair and the zipper on the gown I wanted to wear were not cooperating. We left the house later than I wanted (which was all my fault), and almost walked into another wedding being held at the same hotel. Then I realized I had forgotten a couple of important items at home, including both my work and personal mobile phones! I’m usually not so disorganized, but for some reason this just wasn’t my day.

But I would not be denied. I was going to this wedding. And it was beautiful, and amazing.

[Disclaimer: Out of my respect for my colleagues’ security and privacy, I’m not going to post any photos that could identify them. Just take my word for it that they all looked handsome and stunning!]

The bride, of course, was the most beautiful woman in the room. According to Uzbek tradition, marriages are typically arranged by the families of the bride and groom, and that was the case for this couple too. I learned that the bride’s parents typically don’t even attend the wedding, nor do many male relatives, which is really more of a party thrown by the groom’s parents to welcome the bride to their family (she will usually go to live in their home afterwards).

As I know from looking at so many Uzbek wedding photos, the bride is typically expected to behave very modestly, to not dance, and to sit solemnly with her eyes downcast. It took me a while to stop being sorry about this and accept it as their way. I can understand why leaving one’s family for the first time, for something more or less unknown, would give a bride, typically in her late teens or early twenties, serious pause. I think at my own wedding I smiled nonstop the entire morning, day, and night, because by 23:00 my face ached like I’d been blowing up balloons.

This bride did not look at people who came to congratulate the couple, and sat for most of the wedding with her right hand over her heart. When I handed them some money and our congratulations, the bride would not raise her head to make eye contact with me (although the groom was beaming). I really wanted a closer look at her beautiful face! I did notice her smiling a few times at her groom and looking happy before catching herself and looking sad again, and I couldn’t help smiling hoping it would be a great match for them both. 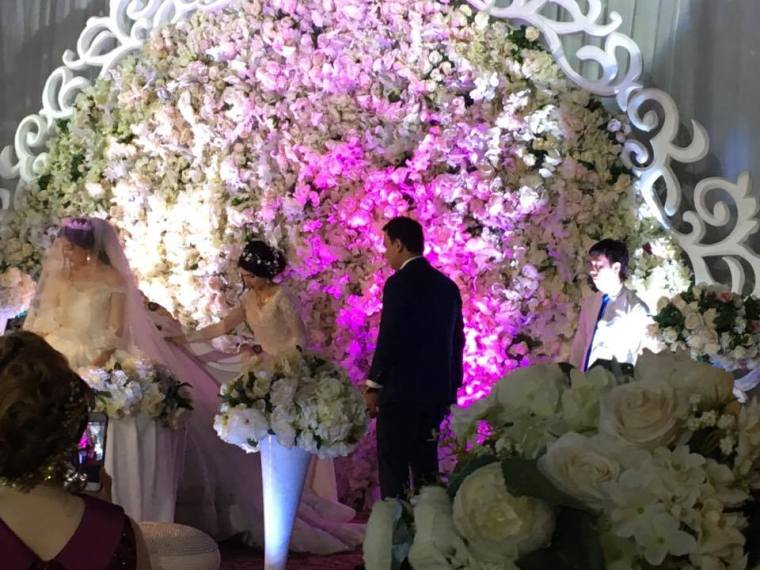 Since the bride and groom had not arrived until the second hour, I’d had plenty of time initially during dinner to otherwise look around. One of the first things I had noticed when I walked into the hall was that the tables were separated by gender (except ours), and that there were many more women present than men. My colleagues told me that this was typical, as men have their own celebratory event hosted by the bride’s family known as “morning plov”, which is a meal of traditional Uzbek pilaf served from early in the morning until the late morning or early afternoon. My husband has attended one of these men-only events and reported that it’s very informal – arrive early in the morning, share a plate of plov with the man next to you, and depart after 20 minutes. Now that’s a man’s type of gathering! Although if they were American men, I guess it would probably happen in the afternoon and involve sports and beer.

A.’s parents went to a lot of expense to make the event very beautiful and entertaining. There was a multitude of live singers and traditional Uzbek folk dancers, and all of them were top notch. The singing and dancing was so expressive, so beautiful, and really got the wedding guests involved in their performances. By American standards it was extremely loud, though; when we left after the third hour, my ears were absolutely ringing. 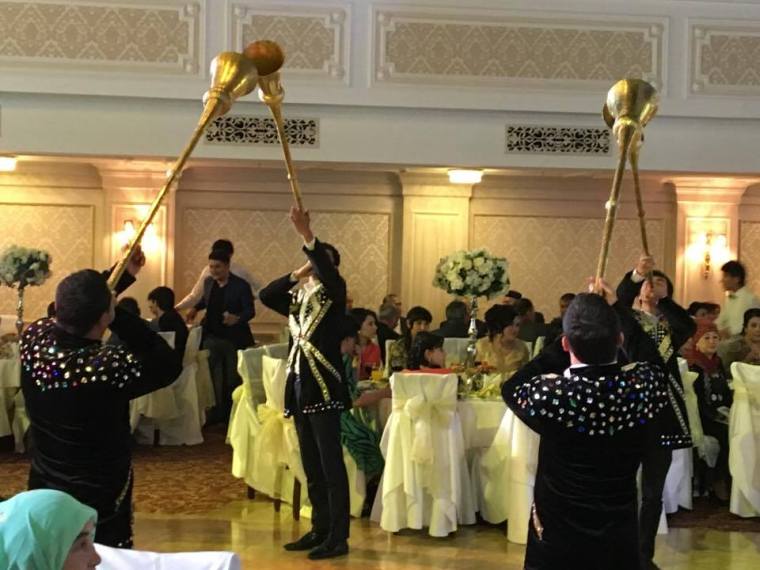 The folk dancers were even kind enough to indulge my husband’s request to take a picture with us. 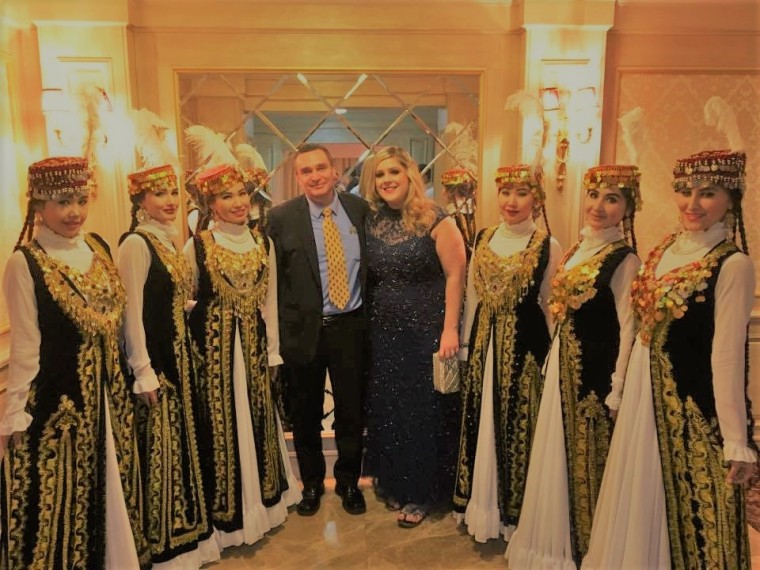 All in all, it was a night I won’t forget. One of my favorite parts was when the elderly female relatives stood to give their blessings to the couple. I will always be grateful for that eleventh hour invitation. Not only can I say I didn’t miss out on such a special Uzbek rite of passage, but I also was graciously allowed, even as somewhat of an outsider, to share in such a special event for this family.

In other news, we had one more reason to get fancy the weekend before last. My husband and I attended the annual charity ball to benefit the international school here. It was our sixth and final ball in Tashkent, and as I walked out of the salon with my outrageously inexpensive and fabulous hairdo, I have to admit that I will miss this circuit. 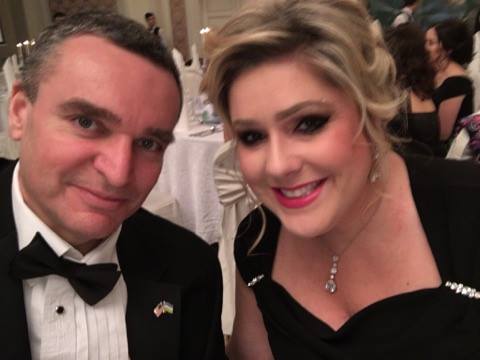 Last week also marked the three year anniversary of the first post on Collecting Postcards, where it all started!

I think now it’s safe to pack away my ball gowns and cocktail dresses, and my husband’s tuxedo for Canberra. Thanks Tashkent!